Destiny Duron Deas '08 reflects on her time at Duke Law

May 12, 2008 — In more ways than one, life has come full circle for Destiny Duron Deas '08. She has finally completed an education at her “dream school” and this fall, she will enter a year-long a clerkship with Judge Paul Niemeyer of the U.S. 4th Circuit Court of Appeals in Baltimore, Md., a position similar to her job prior to law school.

“I had applied to Duke as an undergrad and had gotten a very kind letter that said, ‘We hope you have made other plans for the fall,’” she recalls. Instead, Duron Deas attended Southern Methodist University in Dallas for her undergraduate education and majored in Economics and International Studies. After college, she married her high-school sweetheart and moved back to her hometown of Shreveport, La.

“I tried to be a housewife and utterly failed,” she says, laughing. “About three or four months into our marriage, [my husband] told me that if I didn’t get a job, he was going to take me down to the local pizza place and ask them if I could clear tables for free. I was making everyone in our town crazy, because I was so bored.”

She eventually found a job clerking for a state court judge where she did legal research and helped to create a medical malpractice handbook. “I knew that I wanted to go to law school,” she says, telling how her grandmother gave her an anatomy kit as a child, because at the time she thought she wanted to be a doctor. “I couldn’t figure out any part of it,” she says. “I remember putting the kit up in a box and thinking, ‘Well, maybe I should be a lawyer instead.’”

When she received her acceptance letter from Duke Law, Duron Deas says she burst into tears. “I could not believe that they actually wanted me to come to school here,” she says. Though it meant living apart from her husband who had recently accepted a job in Atlanta, she moved to Durham and began to pursue a joint JD-Masters degree in East Asian Studies.

“[I was surprised at] how flexible the administration was in helping me to craft my own path,” she says. “They bent over backwards to let me do a lot of different things that I wanted to do from my very first semester at Duke Law: working on a humanitarian aid project for Katrina victims, helping me to figure out a way to get to Peking University, even though I was the first law student to go, and helping me to work out classes with my master’s degree program. I was really amazed at how excited they were about the things I got excited about.

“Here you are an individual,” she continues. “There’s not a push to become one type of lawyer. They are really excited about who you want to be and they want to do their best to make sure you have the opportunity to be that person.”

Looking back, Duron Deas says she will leave Duke Law with many fantastic memories from her summer start at “Camp Coleman” with Professors James and Doriane Coleman to competing in the World Trade Organization International Moot Court competition this year. Perhaps her favorite times, though were “just getting to sit in professors’ offices and hear stories from someone who has really made a difference in the world tell you what they did and how,” she says.

“I feel like so much of my life has been changed. [I’ve gained] the ability to analyze on a different level — to be able to push away my feelings about whether this is moral or good and to be able to look at it from a more objective perspective,” she says. “It’s not that I’ve lost the ability to figure out the other, it’s just that I’ve just added a new level of ability to analyze. That’s been helpful in every area of my life, to be honest. From relationships all the way to working on contracts; it’s not just a legal skill, it’s a life skill.”

And her overall experience at Duke Law? “I have loved it,” she says emphatically. “It has not disappointed me in the least.” 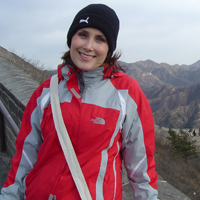 Destiny Duron Deas '08 at the Great Wall of China.