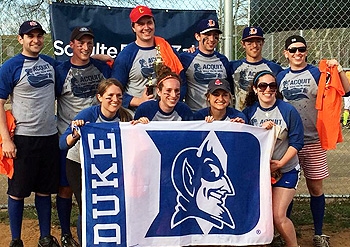 On Sunday, the Duke Diamond emerged as champions at the 31st Annual University of Virginia Law School Softball Invitational in Charlottesville. After tying their first game, the team of 2Ls went on to win seven straight games to take the trophy in Duke’s first championship-game appearance since 1988.

Better known to fans during Duke’s fall softball season as Acquit While You’re Ahead, the team bested a field of 91 teams from 49 law schools – including two other Duke Law teams – to take the tournament. As Duke’s fall league champions, Acquit was sponsored in the UVA invitational by the Duke Bar Association.

Duke Law also was represented by the 3L Dirrrty Devils and Duke Brew Devils on the UVA diamonds.

“While softball may seem trivial, it truly unites students and faculty, especially as a 1L, when softball helps form friendships and section pride,” said Duke Diamond captain Patrick Spaugh. “This was demonstrated by the other two Duke teams prolonging their trips to cheer for us – louder than the home team’s fans – at all five of our games on Sunday.

“What made our victory special is that we are all close friends and classmates,” he said. “Not only were we determined to play our best, we were focused on having fun and enjoying the experience.  It was an honor for us to represent the school we love so much and we will always cherish the memory. This wasn’t just a win for our team, it was a win for Duke Law.”

The tournament is a fundraiser for the nonprofit Children, Youth and Family Services, Inc. of Charlottesville (CYFS).