Duke Law celebrates the careers of Donald and Judy Horowitz 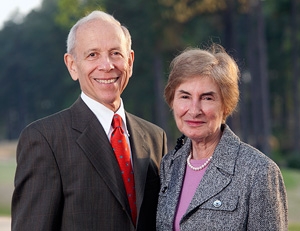 Lauding the careers and contributions of Professor Donald Horowitz and Associate Dean for International Studies Judy Horowitz on Nov. 11, Dean David F. Levi noted, “There is Don.  And there is Judy.  And then there is ‘Don and Judy.’”

Levi was the first of several speakers from the law and political science faculties to pay tribute to the couple’s individual and joint achievements at a celebratory dinner at Durham’s Parizade Restaurant.  Donald, the James B. Duke Professor of Law and Political Science and a renowned scholar of comparative constitutional design and ethnic conflict in divided societies, is retiring only from teaching and will devote full time to research and writing.  Judy, who has headed Duke Law’s international programs for 30 years, will retire from Duke University at the end of the year, but remain closely connected to the Law School.  Together they have built Duke’s summer institutes in transnational law, maintaining on-site oversight of Duke’s Asia-America Institute in Transnational Law in Hong Kong for almost 20 years.

Donald Horowitz, currently a Fellow at the National Endowment for Democracy, will serve as a Fellow of the American Academy in Berlin during the spring semester before serving, next fall, as the “Academic Icon” at the University of Malaya in Kuala Lumpur.

“Don, after eight books and such a stellar academic career, you have earned that title,” said Levi. Horowitz’s works, highly influential in both law and political science, include The Courts and Social Policy (1977), which won the Louis Brownlow Award of the National Academy of Public Administration; Ethnic Groups in Conflict (1985, 2000); The Deadly Ethnic Riot (2001); and Constitutional Change and Democracy in Indonesia, forthcoming from Cambridge University Press.

Horowitz, who joined the Duke faculty in 1980, has received multiple awards for his work; he was elected to the American Academy of Arts and Sciences in 1993 and in 2011 was awarded an honorary doctoral degree by the Free University of Brussels.

Professor Michael Munger, the former chair of Duke’s Political Science Department, noted the particular influence, among political scientists, of Horowitz’s work on divided societies, offering his book, Ethnic Groups in Conflict, by way of example; that book alone has generated more than 5,000 scholarly references, Munger pointed out.  “When I look at the contributions that Professor Horowitz has made to our discipline, I’m awed and a bit humbled, and I hope that we can make up his loss in our department,” he said.

Representing the international students, SLD candidate Dian Abdul Hamed Shah LLM ’09 praised Horowitz as an academic supervisor and mentor.  “You have taught me so much ─ even about my own country ─ and not just about academic matters, but also about life.”

Jennifer Maher ’83, associate dean for International Studies, called Horowitz a “wonderful raconteur,” a consummate guide to other countries and cultures.  She singled out his “embrace” of the intellectually curious students who attend Duke’s summer institute in Hong Kong.

“He will show them Hong Kong and he will show them Asia.  And if they’re not American, he will tell them how to be more like Americans ─ for better or worse,” she joked.  “His care for students and his mentorship of young academics is really remarkable.”

Judy Horowitz joined the Duke Law staff in 1981, recruited by then Dean Paul Carrington to assist the few foreign students that he was beginning to admit to the Law School.

“At that time, the LLM and SJD programs had a small handful of students; no exchange student relationships, no summer institutes; and no international alumni associations,” said Levi.  “Today the Law School has 90-plus LLM students from 37 countries; 12 SJD students in residence; exchange agreements with 21 overseas universities; summer institutes in Geneva and Hong Kong and Durham; and more than 1,000 international alumni.

“All of these programs, under Judy’s direction, have contributed immeasurably to Duke Law’s stature in the world and leadership in international law and legal education,” he said.  Her commitment to the internationally-trained lawyers in Duke’s LLM program is particularly notable, he added.

“She takes her foreign students under her wing and makes sure that their time at Duke is rewarding academically and socially.  Frequently I am told by our foreign alumni that their year at Duke was the ‘best year of their life.’”  Their affection and gratitude was evident when he traveled with Horowitz and Maher to visit alumni in Japan last spring, he said.  “Quite simply, they revere Judy.  They admire her, they are grateful to her, and they love her.”  International alumni have contributed enthusiastically to the Judy Horowitz Scholarship Fund in her honor, raising $500,000 of a $1 million goal to date; once fully endowed, the fund will provide a full scholarship each year to a deserving international scholar.

SJD candidate Shah praised the kindness Horowitz displays towards the international students.  “Judy used to hold me for ‘detention’ in her office every day for a few minutes just to make sure I was doing well and progressing well in my program,” said Shah, a native of Malaysia who studied law in England before coming to Duke.  “The level of care and attention she gives her students is unrivaled, and I think that really defines the kind of student-faculty-school relationship we have here at Duke Law.  And I’m very grateful for that.”

Maher called her colleague and close friend of 25 years a superb judge of character.  “She has an open mind about this ─ she’s non-judgmental,” said Maher.  “She is fascinated with who they are and what they are and not what one feels they should be.  And as a result, as the dean said, there are thousands of students who have had the best year of their life at Duke Law School and have done such things as name their children ‘Duke’ and ‘Judy.’”

Don and Judy:  “An irresistible force”

Of both honorees, Maher said, “Their friendship is something to treasure.   People go to their home for fun or when they are having trouble and need some advice.  It’s a wonderful thing.”

Referring to the couple as “an irresistible force,” Levi thanked them for their service to the Law School.  “They have brought talented young lawyers here from all over the world and maintained connections with so many of them,” he said.  “They created the [international] institutes and together ran the Hong Kong institute for most of its life, establishing deep ties to the University of Hong Kong and scholars from all over the world.”  With Judy Horowitz at the administrative helm, the two helped launch the overseas programs with “Duke in Denmark” at the University of Copenhagen in 1986, and later were instrumental in establishing the Duke-Geneva Institute in Transnational Law and the Asia-America Institute for Transnational Law.

“We miss having them with us here in Durham.  But ‘icons’ are like that.  They belong to everyone.”

In his remarks, Donald Horowitz thanked all the deans he worked with ─ Carrington, Pamela Gann ’73, Katharine T. Bartlett, and Levi ─ for their support and making their success at Duke possible.  Acknowledging his colleagues in both law and political science, he called Duke a truly congenial place to do interdisciplinary work.  He also expressed pride in the Law School’s internationalization and its high profile around the world.  “Duke is the best known U.S. law school all over China,” he said, crediting the accomplishments of its numerous Chinese graduates.

Judy Horowitz recalled her shared commitment, with Maher, to make LLM students’ year of studies at Duke Law “the best year of their life."

“Thank you all for making my 31 years at Duke the best years of my life,” she said.