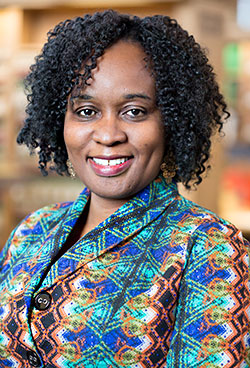 Femi Cadmus, a leader in the field of law librarianship and legal information access, has been named the Archibald C. and Frances Fulk Rufty Research Professor of Law, associate dean of information services and technology, and director of the J. Michael Goodson Law Library at Duke Law School.

Cadmus comes to Duke from Cornell Law School, where she is the Edward Cornell Law Librarian, associate dean for library services, and professor of the practice. She previously served in various roles in the law libraries at Yale Law School, George Mason University School of Law, and the University of Oklahoma School of Law. In July, she will become president of the American Association of Law Libraries.

“I am truly excited about becoming a vital contributor to Duke Law’s forward thinking, bold, ambitious, and strategic vision,” Cadmus said. “The Goodson Law Library and its outstanding staff will continue to play an integral part in executing the Duke Law vision, serving both as catalyst and support for innovative and cutting-edge initiatives in research, scholarship, instruction, and technology.”

“Femi Cadmus will be a wonderful director of the Duke Law library and a worthy successor to Dick Danner,” said David F. Levi, the James B. Duke and Benjamin N. Duke Dean of the School of Law. “She will carry on our tradition of innovation and leadership in this field, including understanding how technology is transforming legal research, instruction, and practice.”

“I didn’t have any knowledge whatsoever of American jurisprudence or how to find the law in the U.S., but I had people coming up to me with requests, and so I quickly learned,” Cadmus said. “I thought, ‘This is fascinating, I could do this permanently,’ and that was what led me to library school.”

After earning a master’s degree in Library and Information Science from the University of Oklahoma, she was hired as a law librarian at George Mason. At Yale, she served as associate law librarian for administration at Lillian Goldman Law Library and lecturer in legal research. She has directed Cornell’s law library for the last seven years.

During her tenure at Cornell, Cadmus has led several efforts to use digital technology to deliver information in innovative ways. Last year, the law library and four partners launched LawArXiv, a free open access legal repository owned and maintained by members of the scholarly legal community. In 2015, it joined with Yale and the International Labor Organization to develop Global Online Access to Legal Information, or GOALI, to make law and law-related academic and professional content available for free in more than 115 low- and middle-income countries.

Cadmus also supported the development of Cornell’s Legal Research Clinic, in which upper-level students work under the supervision of attorney-instructors to complete research requests from nonprofit organizations and entrepreneurs, individuals, and legal services providers in the community. “Those types of explorations for me — giving back to the community, whether it’s local or whether it’s global — are very satisfying and really have been the highlights of my tenure [at Cornell],” she said.

As a scholar, Cadmus has explored the impact of technology on law libraries, law librarianship, and legal instruction. She is a frequent writer and presenter on current legal research methods, the evolving role of the 21st century law library, open access to legal information, and law library management and administration.

Cadmus’ hiring capped a nationwide search led by Katharine T. Bartlett, the A. Kenneth Pye Professor of Law, and Associate Clinical Professor Jeff Ward ’09, director of the Duke Center on Law & Technology. She will begin working at Duke in November.

“Given how much we value our library at Duke Law, we set out on our search with extremely high expectations for our next leader, and we found what we were looking for in Femi Cadmus,” Ward said. “Femi will be a leader here at Duke, just as she is in the library community nationally and in data access communities internationally.”

Added Bartlett: “Femi has the experience, drive, and reputation for excellence that we had hoped to find to carry on Duke’s reputation for leadership in the law library world. I am thrilled to welcome her as a colleague.”