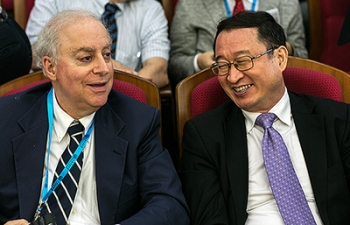 Duke Law joined forces with a law school in China last month to host the first in a series of annual conferences examining key topics in the laws and regulation of global finance.

The inaugural Financial Law Forum was the result of a three-year cooperative partnership between Duke Law and SJTU signed earlier this year. A public dialogue between Levi and KoGuan Dean Ji Weidong was held prior to the forum.

"Shanghai Jiao Tong University is playing a leading role in the development of the legal frameworks for governing China's fast-growing financial system," said Levi. "Because of Duke Law's longstanding ties to China in finance and law, through alumni like Xiqing Gao and our annual Asia-America Institute in Transnational Law in Hong Kong, this is a topic of great interest and importance to us as well. We appreciate the gracious hospitality of Dean Ji and look forward to deepening our collaborative relationship with SJTU KoGuan School of Law in the future."

“Duke Law School is one of the leading law schools worldwide, with strengths in the financial law and judicial studies,” Ji said. “I believe that a cooperative venture between our two law schools will benefit the reconstruction of international economic order in the Asia-Pacific region in this post-crisis era.”

Ji said KoGuan is committed to helping Shanghai establish a well-functioning system of law that will support its rapid growth as a global financial system. Since 2010, the school has opened research centers on financial law and policy, rule-of-law innovation on financial prosecution, and cross-Taiwan Strait study of insurance laws, while also fostering interdisciplinary training in science, technology and finance.

“In the long run, no institutional arrangement other than a good legal order can guarantee all the goals of financial liberalization, internationalization, and risk control,” he said.

Following opening remarks by Levi, Ji, and other dignitaries, Lawrence Baxter, the William B. McGuire Professor of the Practice of Law and director of the Global Financial Markets Center, delivered one of the conference’s keynote addresses. His talk, entitled “Extraterritorial Impacts of Recent Financial Regulation Reforms: A Complex World of Global Finance,” addressed the effects of unilateral reforms the United States has enacted in response to the global financial crisis and the challenge they present for achieving a seamless global financial system.

“I was very pleasantly surprised by the candor of the speakers, even at the highest level of government,” said Baxter. “China appears to be addressing the challenges of its own financial system and its relationship to the global system in a considered and thoughtful way, and in a manner from which I felt we had much to learn and with which we have plenty of ideas to share.”

“The conference exposed our faculty to scholars and research that they would not be likely otherwise to encounter, and it exposed important figures in China to the extraordinarily high quality of scholarly research being done at Duke,” said Professor Paul H. Haagen, Duke Law’s Associate Dean for International Initiatives, who served as conference co-convener with Yang Li, Vice Dean for Executive Programs and Associate Professor of Law at SJTU. “The level of cooperation and collaboration was exceptional.”