During a lunchtime conversation on Oct. 18, members of the Duke Law community explored the challenges to coexisting in a diverse community while still embracing differences. The event, titled Diversity of Thought: Finding Common Ground, was sponsored by the Career & Professional Development Center, the Office of Student Affairs, and the Center for Law, Race and Politics.

“Over the last several months, our country and world has been faced with uncomfortable conversations about difference,” said Ebony Bryant, Duke Law’s director of diversity initiatives. “These conversations have challenged people, especially those of us in educational environments, to find ways to change the focus from a negative view of differences to the power of finding commonalities in those differences through discussion, understanding, and a willingness to listen and learn.” 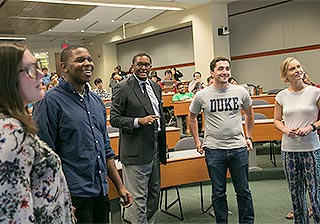 The event’s facilitator, Paul James, assistant vice president for diversity, equity & inclusion in Duke’s Office of Institutional Equity, began the discussion with a thought exercise to demonstrate how easy it is to be blind to certain points of view. After showing a slide, he asked participants to identify the two different pictures it presented. Some participants could make out only one image and not the other, even after repeated clues.

The key to communication, James said, is not neutrality — a negation of differences — but rather understanding: “How we arrive at knowing is very important and yet very different. The challenge comes in when my arriving and knowing is better than yours.”

Two third-year students spoke about their personal experiences as members of underrepresented populations, both in law school as well as in their prior work experience. Charles Thompson, II ’17 described feeling self-conscious about being an African-American male during a political conversation with white colleagues.

“A lot of times I am very aware,” he said. “I’m often the only black person in the room. It’s just something I have to deal with. I’ve had to take affirmative steps to get closer. So I’ll talk about some of my travels, for example, to bridge the gap.”

Rosie McKinley JD/LLMLE ’17 recalled her frustration with being referred to as a “girl” rather than as a woman despite her age and accomplishments. She urged students to become aware of differences that they will encounter in the workplace, the importance of using correct language in discussing those differences, and the negative impact of labels and stereotypes, particularly those associated with gender.

“You might have a trans boss one day and you don’t want to mis-gender that person because that’s a career-limiting experience,” she said. “I don’t think thinking about these things makes you soft, I think it makes you strategic. To think about our differences and to think about how that affects our careers is to be strategic.”

During an open discussion that followed, James was asked why he advised being patient with awkward moments that arise when friends or colleagues are trying to understand differences. In response, he contrasted good-faith curiosity, or “righteous diversity inquiries,” with expressions of prejudice or malice that should not be tolerated.

“I didn’t say be patient with one person’s ignorance,” he said. “[I’m] saying be patient with righteous curiosity, people who want to understand my lived experience. Someone asking me in a deep reflective way what it means to be a black male is different from assuming I am representative of all black males.”

Shajuti Hossain ’18, who is Muslim, said she often feels discomfort in social and networking events that serve alcohol because she does not drink and neither did her family or close friends prior to law school.

“The Diversity of Thought event brought up many issues that the legal community frequently experiences but rarely discusses,” Hossain said afterward. “I appreciate Duke Law for hosting this event, but I hope the whole student body is exposed to discussions on diversity. It is necessary for all students to embrace discomfort in order to become appreciative of diversity and differences.”