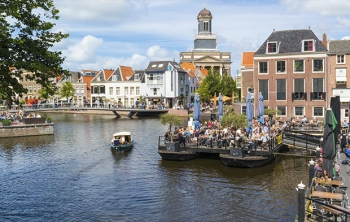 Duke Law School is partnering with Leiden University in the Netherlands to start a new four-week residential summer program in The Hague, known for being home to some of the world’s most important international legal institutions and the birthplace of modern international law.

The Duke-Leiden Institute in Global and Transnational Law will run from June 17 to July 17 at Leiden’s campus in The Hague, with students living in hotel-style accommodations nearby. The program is open to applicants from any country who have completed at least one year of legal education, including JD students from U.S. law schools, prospective LLM students with prior law degrees from foreign institutions, and working lawyers. Students in Duke’s dual JD/LLM in international and comparative law program split their 1L summer between the institute and an internship in a law firm, government agency, or non-governmental organization abroad.

Courses, which will include offerings on trade, criminal law, human rights, and other core areas of international and comparative law, will be fully accredited and co-taught in English by top faculty from the two schools. Visits are planned to the International Criminal Court, the Permanent Court of Arbitration, and the international organization that regulates chemical weapons, all of which are based in The Hague and have contributed to the city’s reputation as the “legal capital of the world.”

“This is a summer program for people who want to study these areas of law with leading faculty, in a place in which they can also enhance their learning by the location and by the institutions that they’ll be near,” said Professor Curtis A. Bradley, the director of the institute. “The program gives them a unique experience of learning from a diverse set of teachers and students, and the ability to be in the place that is arguably the center of international courts and adjudication is a huge asset.”

The institute is the latest of the summer institutes in international and comparative law that the Law School has operated abroad over more than 30 years. The first program, Duke in Denmark, was established in Copenhagen in 1986 at the same time Duke Law launched the JD/LLM. The program later moved to Brussels before the Law School partnered with the University of Geneva to establish the Duke-Geneva Institute in Transnational Law. The Geneva summer institute ceased operation in 2017. Meanwhile, Duke started a second summer institute with the University of Hong Kong, the Asia-American Institute in Transnational Law, which operated until 2015.

Bradley, the William Van Alstyne Professor of Law and Professor of Public Policy Studies and co-director of Duke Law’s Center for International and Comparative Law, praised Leiden as an energetic and entrepreneurial university with deep experience hosting summer programs for students, a strong interest in collaboration, and impressive classroom and conference facilities in The Hague. The region’s affordable cost-of-living and central location within Europe — Amsterdam is just a 30-minute train ride away — also made it an attractive site for Duke’s summer institute, as did its rich cultural and legal history, including being the site where 17th century jurist Hugo Grotius wrote the first book on international law and two major world peace conferences were held, in 1899 and 1907.

“The social experience of learning outside the classroom with people from other countries and cultures has always been an important component of Duke’s summer institutes,” he added.

Faculty from Duke Law and Leiden will each teach two weeks of every course independently, with a period of team-teaching in the middle. This co-teaching method, which Duke has long employed at its summer institutes adds depth to classes in comparative law, said Jennifer Maher ’83, associate dean for international studies

“To have someone teaching from the U.S. model and from the European model is itself comparative,” she said. “It teaches future lawyers why their counterparts in another country are communicating in the way they are and why they analyze things the way they do, because that’s the way they’ve been taught.”

The opportunity to interact with guest speakers and practitioners at visits to legal institutions and law firms makes the classroom discussions, “come alive,” and helps students to envision what it means to practice transnationally, she said.

For more information on the Duke-Leiden institute, or to submit an application, visit the web site.