Justice Ginsburg, who died on Sept. 18, is remembered as a path-breaking and inspirational advocate and jurist, a dedicated mentor, and a friend to Duke Law. 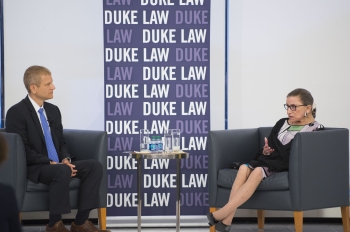 For Neil Siegel, the David W. Ichel Professor of Law and Professor of Political Science, Justice Ruth Bader Ginsburg, was “my Justice.” Siegel, a scholar of constitutional law, clerked for Justice Ginsburg in the U.S. Supreme Court’s October 2003 term, and stayed close to her in the years that followed.

“I was … fortunate to have her be present in my life — and in the lives of my daughters,” he wrote in a tribute following Justice Ginsburg’s death on Sept. 18. “She always made herself available when they or I asked. She was always concerned about how they and I were doing, especially during hard times.”

Justice Ginsburg, an equal rights scholar and advocate who prevailed in five of the six gender equality cases she argued before the Court before she became a judge, also was a friend to Duke Law. She joined Siegel for annual discussions of cases decided by the Court in seven successive terms, also sharing stories of her life and career with students, faculty, and alumni at those events and others. Like Siegel, members of the Duke Law community are mourning her passing and recalling her incisive jurisprudence and towering intellect, civility, kindness, and pathmarking advocacy.

“Justice Ginsburg has been my inspiration and role model since my first days as a law student and throughout my career,” said Kerry Abrams, the James B. Duke and Benjamin N. Duke Dean of the School of Law and Professor of Law. “It is probably no exaggeration to say that if it were not for Justice Ginsburg and the social movements that she helped to shape and support, the world would be a very different place today. It is difficult for me to read the sex equality cases that she litigated or authored and not feel profound gratitude that her work helped to make it possible for someone like me to be a lawyer, a law school professor, and a dean.”

Abrams was not alone in noting Justice Ginsburg’s historic influence on the law both before and after she took her seat on the nation’s highest court.

“Surely no single individual had more impact on securing the rights of women in this country than Justice Ginsburg,” said Katharine T. Bartlett, the A. Kenneth Pye Professor Emerita of Law and former dean of Duke Law, a renowned scholar of gender law and employment discrimination. “As an advocate, she was the architect of the legal strategy for breaking down the barriers women faced in every aspect of their lives — a strategy whose particular genius was that it took account of men’s as well as women’s interest in equality under the law. As a jurist, she has been both the conscience of the Supreme Court, and its intellectual leader in expanding the meanings of equality and justice across a variety of domains — not just for women, but also for members of racial minorities and other groups who have been historically marginalized. History will record her as one of this country’s greatest Justices.”

Lisa Kern Griffin, the Candace M. Carroll & Leonard B. Simon Professor of Law, has examined Justice Ginsburg’s contribution to one of her fields of expertise, constitutional criminal procedure. Griffin, a former clerk to Associate Justice Sandra Day O’Connor, called Justice Ginsburg’s passing “a shattering loss” for both the legal profession and the nation.

“She was a titan and a treasure, brilliant and beloved, among the most consequential Justices ever to serve on the Court, and the advocate most responsible for advancing equal citizenship for women,” said Griffin. “She inspired an entire generation of women lawyers and created opportunities for all of us. Justice Ginsburg recently said that she wanted to be remembered for ‘making things a little better than they might have been if [she] hadn’t been there.’ The Court, and our country, are a lot better because she was there, and we will be forever in her debt.

“Of course it is painful to contemplate the burden on Justice Ginsburg, and the humanity, enormity, and irony of her passing in the weeks before a consequential election. But in recent years she marveled at her role in American culture, at her status as an unlikely icon, and at the tremendous progress she was able to catalyze and then embody. I like to think that the robes were heavy but she wore them lightly, and that she passed knowing how many millions felt themselves to be her heirs.”

During a public conversation a public conversation with Douglas B. Maggs Professor Emeritus of Law Walter Dellinger in 2005, part of the Program in Public Law’s “Great Lives in the Law” series, Justice Ginsburg urged students to find a way to engage in volunteer service even at the earliest stages of their careers: “Whatever community organization, whether it's a women's organization, or fighting for racial justice … you will get satisfaction out of doing something to give back to the community that you never get in any other way.”

From 2013 to 2019 Siegel, who directs the Duke Law D.C. Summer Institute on Law and Policy, hosted annual conversations on the recently concluded term with Justice Ginsburg for institute students and D.C.-area alumni. Her passion for opera was sometimes on display in these exchanges, such as in this refusal to characterize the 2014-2015 term as either conservative or liberal. “I don’t use those labels,” she said, before quoting Gilbert and Sullivan’s comic opera “Iolanthe”: “‘Nature always does contrive that every boy and every gal that's born into the world alive is either a little liberal or else a little conservative.’” In terms of her personal judicial philosophy, she said, “I think I’m very conservative in terms of wanting to preserve the fundamental boundaries of our Constitution.”

On Feb. 3, 2020, Justice Ginsburg joined Siegel and a panel of distinguished judges at an event organized by Duke Law to mark the centennial of the 19th Amendment and to celebrate women's advancement in the law, a conference inspired by the fact that at the time, all the editors-in-chief of 16 top law journals were women. She called the EIC sweep “a good beginning,” recounting how, when she entered Harvard Law School in 1956, its law review included only two women.

“I have a picture of my second year and it shows all these men — and two small women in the crowd,” she said. “It’s an enormous change to see women in numbers on law reviews and heading law reviews. It’s one of the things that makes me optimistic about the future.”

Justice Ginsburg, who was unable to find a law firm job in 1959 in spite of graduating first in her class at Columbia, where she completed law school, marveled at the range of careers, including entrepreneurship, that are now open to women with law degrees. That included her granddaughter, a recent Harvard Law graduate.

David F. Levi, the Levi Family Professor of Law and Judicial Studies and director of the Bolch Judicial Institute, has known Justice Ginsburg since the early 1980s when they met at an American Law Institute (ALI) annual meeting and noted their mutual friendship with the late Columbia and Stanford Professor Gerald Gunther. Gunther who helped her secure a clerkship when that position also was effectively closed to her as a young mother. Levi, now ALI president, got to know her well over his long career on the federal bench — he became Chief United States District Judge for the Eastern District of California — and as dean of Duke Law from 2007 to 2018. He recalled Justice Ginsburg in a tribute, writing that her enormously influential legacy extends beyond her professionalism as a jurist and her ‘clear and tightly reasoned’ opinions.

There was something more, symbolized by her “long and loving friendship” with the late Associate Justice Antonin Scalia, Levi said.

“Their friendship seemed such a surprise to many, but should not have. They were both New Yorkers of a certain age who loved opera, travel, good conversation, and the law. Their disagreements over cases was just part of what made the work so absorbing, and, as Ruth often said, Nino’s dissents made her opinions that much better. In the end, they were both judges, doing their job, enjoying the give and take — a model for the rest of us of professional civility and maturity in divisive times.

“We will miss her example, her dedication to justice and the law, and her determination to give her all to her country, family, and profession.”