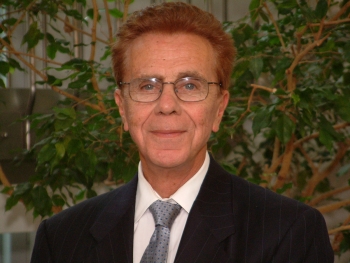 William W. Van Alstyne, an eminent scholar of constitutional law who served on the Duke Law faculty from 1965 until his retirement in 2004, died on Jan. 29 in Southern California.

At Duke, Van Alstyne was the William R. and Thomas L. Perkins Professor Emeritus of Law. Through his scholarship, public testimony, and private advice to many congressional committees and members of the House and Senate, he was counted among the nation’s leading legal scholars, with particular expertise on the First Amendment.

“Bill was an intellectual giant,” said A. Kenneth Pye Professor of Law Katharine Bartlett, who served as dean of the Law School from 2000 to 2007. “No one did more to elevate the reputation of this law school into one of the premier law schools of this country, and no one was more generous with his ideas or in transmitting to students respect for the rule of law.”

Van Alstyne’s wide-ranging scholarship has been cited in a large number of judicial opinions including those of the Supreme Court. In January 2000, the Journal of Legal Studies named him among the top 40 most frequently cited legal scholars in the United States of the preceding half-century. He was twice selected in polls of federal judges, lawyers, and academics as one of three academics among “the 10 most qualified” persons in the country for appointment to the Supreme Court. He was elected into the American Academy of Arts and Sciences in 1994.

“I have been a huge fan of his work since first reading his famous article on Marbury v. Madison in law school,” said Professor Curtis Bradley on receiving the distinguished Van Alstyne Professorship in 2012. “The rigor, independence of mind, and clarity of thought that are evident in his scholarship are all qualities that I deeply admire and hope to emulate in my own work.” The professorship was established in Van Alstyne's honor by Duke Law Board of Visitors member J. Michael Goodson ’66.

Richard Horvitz ’78, who established the Program in Public Law at Duke in 1998, recalled Van Alstyne as “one of the most brilliant and intellectually honest” academics he has known. “An example was his 1994 article in the Duke Law Journal on the Second Amendment,” said Horvitz, a member of the Board of Visitors. “Although Bill personally wasn’t a big fan of guns, that personal preference did not affect the rigorous scholarship he brought to bear in his analysis of this issue. The same was true with respect to other politically charged issues. Not only did I lose a friend but the law community lost a highly principled, intellectual giant. Bill had a major influence on my passion to support the Program in Public Law”

After retiring from Duke, Van Alstyne joined the College of William and Mary’s Marshall-Whythe Law School as the Lee Professor of Law, teaching there until 2012.

After active duty with the U. S. Air Force, Van Alstyne was appointed to the law faculty of the Ohio State University, advancing to full professor in three years. He was named to Duke’s Perkins Chair of Law in 1974. He also received a certificate from The Hague Academy of International Law and was honored with LL.D. degrees by Wake Forest University and the College of William & Mary.

Van Alstyne served as a visiting faculty member on the law faculties of the University of Chicago, Stanford, California (Berkeley and UCLA), Pennsylvania, Michigan, and Illinois. He was also a Fulbright lecturer in Chile, a senior fellow at Yale Law School, and a faculty fellow at the Hague International Court of Justice. He appeared as counsel and as amicus curiae in constitutional litigation in the federal courts, including the Supreme Court, and in numerous hearings before Senate and House committees concerning such matters as the separation of powers, war powers, constitutional amendments, impeachments, civil rights and civil liberties, and nominations to the Supreme Court.

Van Alstyne was past national president of the American Association of University Professors and a member of the national board of directors of the A.C.L.U.

Colleagues and former students have shared many fond memories of Van Alstyne. Calling him “my favorite colleague,” Charles L. B. Lowndes Professor Emeritus of Law William Reppy recalled their extensive travels including to Africa, where they climbed Mt. Kenya, and to the Caribbean, where Van Alstyne introduced Reppy and his wife, Juliann Tenney ’79, to another friend, Justice Ruth Bader Ginsburg. “And he was a great supporter of my academic career,” said Reppy.

“Bill Van Alstyne in his heyday was — in the law school world — the most well-known member of the Duke Law faculty,” said James B. Duke Professor Emeritus of Law George Christie, who joined the faculty in 1967. “The lucky students who were able to take his limited enrollment course on the First Amendment came away with an unforgettable experience. For the Law School community as a whole, Bill will be remembered for his love of Corvettes, motorcycles, leather clothes, and his enjoyment of pipe-smoking. He was truly one of a kind. His friends will sorely miss him.”

Van Alstyne is survived by his wife, Lan Cao, and their daughter, Harlan Van Cao. He is survived by three children, Marshall, Allyn, and Lisa Van Alstyne, from his marriage to Carol Frances. Also surviving is his former wife, Pamela Gann ’73, who served as dean of Duke Law from 1988 to 1999.