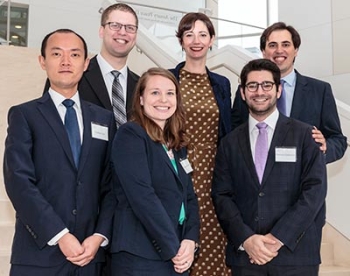 As “Cutler fellows,” Matt Eible JD/LLM’19, Jeremy Iloulian ’18, Haichuan Luo ’18, Dimitrios Lyratzakis JD/LLM ’18, and Meaghan Newkirk JD/LLM ’18 engaged with prominent legal professionals and public servants, including Chief Judge Diane Wood of the U.S. Court of Appeals for the Seventh Circuit, former FBI and CIA Director William H. Webster, and Ivan Šimonović, the United Nations assistant secretary-general and special adviser of the secretary-general on the responsibility to protect. They also worked with faculty advisors from each of the participating law schools, including Clinical Professor Jayne Huckerby, director of the International Human Rights Clinic, to sharpen their research papers tackling issues in international law ranging from trade and investment law to the law of war.

Opening the program on Feb. 23 at the United States Institute of Peace, Judge Wood emphasized that international law is closer and more relevant to the students’ future in legal practice than they might anticipate.

While international legal frameworks put in place since World War II have fostered the effortless flow of ideas, goods, and services around the world, Wood said, challenges have also emerged, including drug trade, online financial scams, and human trafficking.

“The borderless world has some sinister consequences too,” Wood said, “but these are things that we are dealing with right now in the courts.”

Faculty representatives Matthew Waxman of Columbia Law School and Alex Whiting of Harvard Law School engaged in a luncheon discussion with the fellows focusing on the role and recent developments of the International Criminal Court (ICC). Whiting spoke from his experience in the Office of the Prosecutor at the ICC from 2010 to 2013.

Webster joined in a conversation with John B. Bellinger III, former U.S. legal adviser, reflecting on recent events in the United States and calling for the restoration of the values of public service and fierce integrity across party lines.

Šimonović offered the fellows advice based on his own work in diplomacy, justice, and international institutions. Recalling his experience as a member of the Croatian Delegation at the 1995 Dayton Peace Talks, Šimonović said, “Always remember the importance of cultural context in international negotiations.”

The fellows met mentors from institutions including the World Bank, the Inter-American Development Bank, and New Markets Lab to discuss how legal training can be used for the public good. Two mentors, Joseph Klingler and Eric Lorber, described their journeys from their participation as students in the Salzburg Cutler Fellows Program to their current work as an associate at Foley Hoag and senior advisor to the undersecretary for terrorism and financial intelligence at the U.S. Treasury Department, respectively.

Stephen L. Salyer, Salzburg Global Seminar president and co-founder of the Lloyd N. Cutler Center for the Rule of Law, closed the program on Feb. 24 by announcing the opportunity for students to submit applications to travel to Salzburg, Austria, where the Salzburg Global Seminar is based, in May 2018 to serve as rapporteur at this year’s high-level meeting of the Public Sector Strategy Network,  a multi-year, apolitical initiative run in partnership with the Abu Dhabi Crown Prince Court.

“This program is unlike anything else in the world, and beyond what even the top law schools can offer,” said William W. Burke-White, Penn Law’s Richard Perry Professor and Faculty Chair of the Salzburg Cutler Fellows Program. “The fellows interact closely with top specialists in their fields of interest and scholarship, and gain access to a lasting network of peers and mentors.”