The annual program brings together top law students and leading professionals in international law and public service for networking and mentoring in Washington, D.C. 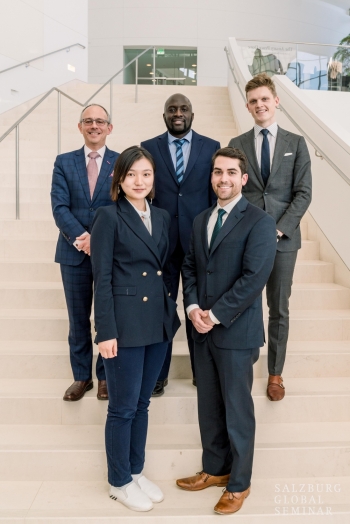 Four Duke Law students were among 56 from the nation’s leading law schools to explore the future of public and private international law through the Salzburg Cutler Fellows Program, held Feb. 20 to 22 in Washington, D.C.

Scott Boisvert JD/LLM ’20 and three internationally trained attorneys in the Law School’s LLM class of 2020, Olonyi Bosire of Kenya, Enning Chang of China, and Tobias Wetlitzky of Germany, were chosen as Cutler fellows based on academic excellence and their interest in international and public interest law. They were accompanied by Laurence R. Helfer, the Harry R. Chadwick, Sr. Professor of Law and co-director of the Center for International and Comparative Law, who served as Duke Law’s faculty advisor to the program.

Advisors critiqued the students’ research papers on topics including domestic violence, LGBTQ rights activism, international environmental criminal law, and investment and sovereign lending in Africa, and gave them advice on pitching their articles to law journals.

They also had the opportunity to discuss their personal career goals and potential pathways in international law with mentors from Third Way, the Foundation for Defense of Democracies, New Markets Lab, the International Monetary Fund, and Covington & Burling.

“I’ve been able to find a community of like-minded peers that is not only similar in their interests, but who are equally ambitious in their dreams and goals,” Boisvert said. “At the Cutler Fellows program, there are people looking to engage actively in the same issues as you and it’s not purely out of academic interests but also true emotion and passion.”

Bellinger and Hadley discussed war powers, reflecting on the evolution of Congress’s war-making authority since the 2001 Authorization for Use of Military Force and the War Powers Resolution recently passed by both houses of Congress that President Donald Trump has promised to veto. Almagro spoke about the conventions underpinning international human rights laws and the role of the OAS in upholding them.

Established in 2012, the Salzburg, Austria-based Cutler Fellows Program honors the legacy of Lloyd N. Cutler, White House General Counsel to U.S. Presidents Carter and Clinton. The program has more than 350 alumni around the world.

“It has been a pleasure to see the hard work you have put in and the fast friendships you have made here, and we look forward to continuing these connections through our Cutler and Salzburg Global Fellowship,” said Stephen L. Salyer, president of Salzburg Global Seminar.