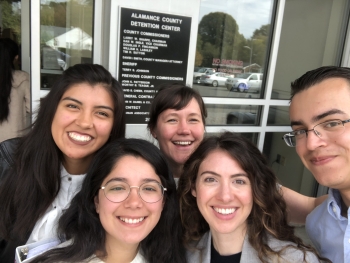 In recent months Duke Law student volunteers, collaborating with fronteraTech, a legal nonprofit based in Durham, have provided legal orientation and consultations to more than 100 detained asylum seekers at the Alamance County (N.C.) Detention Center and are seeing encouraging results from their work. Members of the Duke Immigrant and Refugee Project (DIRP) have been making weekly visits to the jail throughout the fall semester to prepare migrants for their “credible fear” interviews — a critical early-stage conversation that determines whether or not a person may seek asylum in the United States.

So far about 75 percent of the detainees advised by the students have passed their interviews, says Clinical Professor and Immigrant Rights Clinic Director Kate Evans. Evans is coordinating the students’ involvement with fronteraTech, which initiated the work in the jail and has trained the students and collaborated with them on case follow-up.

“The majority are getting positive decisions despite recent restrictions that could lower the rate of passage in this critical interview,” Evans says. “We’re working with asylum-seekers at the preliminary gate-keeping stage. I could not be prouder of the students’ impact in just a few weeks.”

The Alamance County Detention Center, located about 30 miles away in Graham, has been housing migrants — all men — since the summer after contracting with Immigration and Customs Enforcement to hold detained immigrants to relieve overcrowded facilities along the border and in Georgia. Most of the men started their journeys from Central and South America, but they also include migrants from China, Sri Lanka, Bangladesh, and Cuba. Many have already spent months in other facilities before being brought to North Carolina. All hope to gain the right to live and work safely in the U.S. through the asylum-seeking process.

“You don’t do that lightly,” Evans says. “The departure is hard. The journey is hard. The detention is hard. There is something very intense that is motivating folks to be in the situation in which we see them. They know why they have fled but that doesn’t mean they are ready to explain it in terms of what the asylum officers are asking, so that’s why we’re there.”

DIRP members have been visiting the jail on Friday mornings to listen to migrants’ stories, identify which aspects are key to their  asylum claims, and help them prepare for the experience of the credible fear interview — a phone call with an asylum officer who will determine whether or not a detainee has a legitimate fear of persecution in their home country that would qualify them to seek asylum in the U.S.

Typically lasting one to two hours, credible fear interviews focus on five elements: the nature of the  harm experienced in the past or feared in the future; the identity of the person or group committing the harm; the reason the asylum-seeker is being targeted; why the person cannot rely on the police in his home country to protect him; and why the person cannot relocate to another location in his home country and be safe with his family.

Much rides on the result: Detained asylum-seekers who pass the interview can seek release so that they can leave jail, and begin applying for asylum while reunited with family or friends already in the U.S. Those who receive a negative decision after this interview must fight for review in the immigration courts, face longer detention, and may be deported without a further opportunity to seek protection. Their stories can be eye-opening, especially for students who have not set foot inside a jail.

“There are people who made their way through multiple countries to get here,” says Natalie Pate ’21, DIRP’s executive director for research.

“Some people were literally tortured by gang members and police in their home countries month ago and they have made a very long journey across the border and been shipped like human cargo from place to place. It is interesting work and these are decent, human people, so it’s enjoyable to feel like you are helping people. But it is hard to know that when I leave they have to stay in the jail.”

Says DIRP volunteer Christine Mullen ’21: “This is really heavy stuff to a lot of people who haven’t done this kind of work before. I’m still thinking about the people that we met in jail.”

One man migrated from Cuba, where he says he was followed, identified, beaten and jailed repeatedly for not showing sufficient support for the government by participating in parades, rallies, and the like. Many migrants have similar stories, but often have a difficult time articulating them.

“It took a long time to get through how much had happened to him because it wasn’t necessarily something that he thought of as unique,” Evans says of the case. “Those are well protected and established claims under asylum law, but he hadn’t put all those pieces together and connected the dots. He wasn’t ready to go into that interview if the student hadn’t spent two hours drawing out the full extent of what had happened to him and why, and making sure he knew to talk about these facts. So that’s the value we can bring.”

DIRP was drawn into the project when Evans, who is teaching Crimmigration Law this fall and is preparing to welcome the first class of students to the Immigrant Rights Clinic in the spring semester, was contacted by fronteraTech, an organization founded by Damjan DeNoble PPS ’07 to provide pro bono fear interview preparation to detainees and who called the involvement of Duke Law students “a fruitful collaboration.” Interest in the pro bono project was strong: more than 50 students attended the training session conducted by Evans and fronteraTech immigration attorney Atenas Burrola.

“Many students, including myself, came to law school hoping to make a difference in the world,” says D.H. Nam ’21, executive director of pro bono services for DIRP.

“The Alamance project has reminded me about our privileged positions as legal professionals to help others in vulnerable and hopeless positions. It has deepened and fueled my passion for public service.”

It has also been a welcome experiential learning project for students interested in enrolling in the new clinic, Duke Law’s 11th, which will offer them the opportunity to develop critical professional skills and deepen their knowledge while providing free legal services to immigrants who could not otherwise afford a lawyer. Student-attorneys in the clinic will primarily represent individuals seeking asylum or other protections and are facing deportation, services that are sorely needed: The vast majority of asylum-seekers do not have attorney representation, but those who do are around five times more likely to win their asylum cases, Evans says.

The value of Duke Law’s presence in Alamance County was brought home when the group was able to help two migrants who had been wrongly slated for deportation get off that list and instead have the opportunity to seek safety in the U.S., and to assist in the release of a minor who was being held erroneously as an adult. He is now entitled to protections as an unaccompanied minor.

“After we identified him as wrongly detained, fronteraTech’s lawyers got him out and he now has a whole different set of options and opportunities,” Evans says. “That was just by virtue of us being there.”