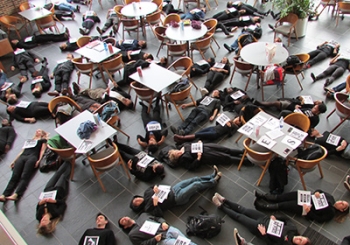 More than 60 members of the Duke Law community held a “die-in” in Star Commons on Dec. 10 to peaceably protest the death of New York resident Eric Garner and other unarmed black and minority individuals killed by police officers in recent years. Holding signs bearing the names of men and women killed, participants, including students, faculty, and staff, laid on the floor in silence for 11 minutes — one minute for each time Garner told police he couldn’t breathe as they continued to forcibly restrain him.

"It's not like we're making it up. It's a real thing that's happening, so we can't not talk about it," said Judea Davis JD/MA '15, one of the student organizers of the event.

Mark Horosko ’15 said the die-in indicated that the Duke Law community is “paying attention” to the deaths of unarmed minority citizens. “We know what’s going on, and we don’t like what’s happening,” he said.

Davis, who organized the die-in along with 3Ls Gordon Summers, Jana Kovich, and Sarah Tishler, and 2Ls Christine Kim, '15, Liz Wan'gu, Ana Apostoleris, Peter Lettney, Nichole Davis, and Chris Hood, is planning a panel discussion in the spring semester in order to keep the dialogue going at Duke Law and beyond. Davis hopes events like this will affirm the Law School’s position within the community as an open forum for discussing social problems. "The students that I've talked to believe it's important to get the community to come to the Law School, because this is ‘our turf’,” she said. “We need to find leaders who are invested in the community — lawyers, police chiefs, and representatives of law enforcement — to sit down to continue to talk about these issues."

The Black Law Students Association and the Center on Law Race and Politics hosted a September panel discussion on police brutality and race following the shooting of Michael Brown in Ferguson, Mo.

Davis, who is pursuing a master’s degree in history along with her JD, believes in educating others to bring about positive change.

"In America, we don't do a good job of acknowledging our history or knowing what our history is,” she said. “The Civil Rights movement was hugely successful, but it didn't erase all the stigmas and assumptions about black people. I think it's great that President Obama is taking about body cameras, law schools are sending open letters of support to our attorney general and our president, and people are still doing demonstrations. I hope this means the momentum will last."