Three Duke Law students worked with the International Criminal Tribunal for Rwanda over the past summer, assisting the judges overseeing the trial of those charged with perpetrating the 1994 Rwandan massacres in which 800,000 people died.

Jacy Gaige ’12, John Doyle ’12, and Natasha Alladina ’11, spent parts of the summer in Arusha, Tanzania, where the tribunal is based, working in the judges’ chambers as de facto clerks. The tribunal, established by the United Nations Security Council in 1995, is trying defendants — the alleged political architects of the massacres — on charges that include genocide, crimes against humanity, and war crimes.

“On a day to day basis, the prosecution teams would make a motion to admit a piece of evidence, it would be assigned to one of us to go through the rules and look into whether or not the evidence should be admitted, and if so, whether it could be admitted from video camera from afar, whether it required testimony in court, kind of what the technicalities are,” said Gaige, who worked as a Peace Corps Volunteer in Benin, West Africa, and as a child protection officer with African Union/United Nations Peacekeeping Mission in Darfur prior to coming to Duke Law. “Then you would draft an order for the chambers to review. Sometimes you’d go into court and hear your order read aloud.” 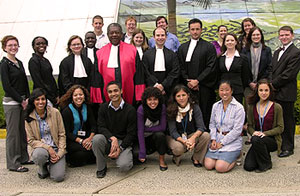 
Gaige appreciated having an inside look at some developments that were unique within the international criminal tribunal system.

“Because the body of international criminal law is in its infancy, new precedent is always being created. For example, this summer a lawyer was put in contempt in a criminal tribunal for the first time,” she explained. “Peter Erlinder, a one-time ICTR defense counsel, was arrested in Rwanda on charges of genocide denial, and some of the allegations against him potentially stemmed from things he had said at the tribunal. The other defense counsel felt they couldn’t defend their clients because of the threat of prosecution in Rwanda, and one current defense counsel was subject to contempt proceedings for refusing to continue his trial.” One defendant died, 10 years into his trial, and just a few days before the close of evidence, she added.

“It was the first time a defendant had died in an international criminal tribunal during trial,” she said. “Milosevic died before his trial started, and another defendant died after the trial ended, but this was a way to see new precedent developed.”

Doyle found the sheer scope of the trial to be educational. There are 22 cases underway in the ICTR, and the Duke Law students did most of their work on the same decade-long case involving three defendants.

“This is a massive legal proceeding, and just learning about different tools for organizing and cataloguing relevant information, and trying to think strategically about case organization was a really useful learning experience,” said Doyle. A dual-degree student who also is pursuing an MA at Duke’s Nicholas School for the Environment, Doyle sought out summer work in Africa in part because of his interest in the disproportionate effects of environmental damage on residents of third-world countries.

Her experience in Arusha helped her learn “to work with what you’ve got,” Alladina said.

“From power failures, to ants on your desk, to working without fully understanding the bigger picture, you have to keep at it and know that every aspect of every task — no matter how insignificant it may seem — is necessary to reach the end goal.”

With roots in Tanzania — her parents were born and raised there — Alladina welcomed the opportunity her position gave her to explore the country. “I had the opportunity to travel to my father's hometown and finally understand where he's from and what has shaped him as a person. I also learned more about the Maasai culture. That was certainly an experience I'll have for a lifetime.”

Assistant Dean of Public Interest and Pro Bono Kim Bart ’02 and Laurence Helfer, the Harry R. Chadwick, Sr. Professor of Law, helped the students secure their positions with the tribunal.

"I'm delighted that three Duke Law students had the opportunity to contribute to the work of the ICTR,” Helfer said. “The trials and appeals at the tribunal raise complex and unresolved legal issues and they provide students with a unique perspective on international criminal justice."