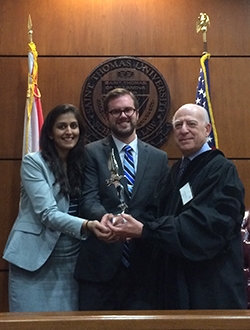 In a competition involving 14 teams from eight universities, Girouard and Shah won first place as well as the Best Briefs Award. Shah and Girouard were also named third- and fourth-best speaker, respectively.

Because Duke Law was the top seed after four preliminary rounds, Girouard and Shah were able to choose the side they would argue during the final round against Florida International University; while many schools had sent two teams to argue each side of the problem, Girouard and Shah handled both.

Advocating on behalf of the applicant, Girouard and Shah addressed seven issues before the International Court of Justice concerning the court’s jurisdiction, the case’s admissibility, acts of aggression, the use of force, the right of a minority population to secede, human rights abuses, and whether the actions of third parties can be attributed to the parties before the court.

The Susan J. Ferrell Intercultural Human Rights Moot Court Competition, which is hosted by St. Thomas University School of Law, was created to increase awareness and respect of human dignity across cultures within the context of international law.