This year's cohort of the summer-long pre-accelerator, includes four early-stage startups with a mission of improving access to justice. "Law can do better. Law must do better. And these are the visionaries who will help get us there," says Center on Law & Tech director Jeff Ward. 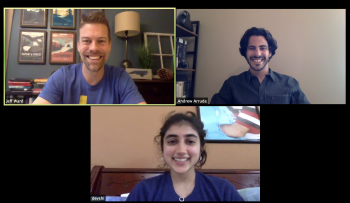 As the nation reckons with inequities in its social and justice systems, the Duke Center on Law & Technology is nurturing four young companies working to expand access to legal services. All are participants in the Duke Law Tech Lab, the center’s summer pre-accelerator program for early-stage legal tech companies.

During the three-month program, the chosen companies—selected by a broad panel of judges from dozens of applicants—expand their networks, learn to navigate the legal tech environment, and move their business plans forward via mentoring, online resources, and weekly live remote presentations by legal tech leaders, subject matter experts, and key industry players.

“Each of these teams represents important opportunities for technological innovation in law,” said Jeff Ward JD/LLM '09, director of the center and associate dean for technology and innovation at Duke Law. “Even more though, these founders possess the right attitude. Law can do better. Law must do better. And these are the visionaries who will help get us there.”

One of the companies, JusticeText, began as a project at the University of Chicago, where co-founders Devshi Mehrotra and Leslie Dove-Jones were computer science majors. Developed initially for use by public defenders, JusticeText helps defense teams process evidence by providing transcription for sources such as body camera footage, interrogation videos, and courtroom proceedings that are difficult for many general transcription algorithms to interpret due to low audio quality and the unique lexicon of law enforcement and the legal system.

“My own political engagement on campus was really focused on racial justice and criminal justice and simultaneously I was studying computer science,” Mehrotra said. “It was just crazy to see how some of the people doing the most important work in society really didn’t have tools at their disposal to do it effectively and efficiently. So I thought, this is a space with a group of people that I really respect and want to be able to work with.”

JusticeText was piloted at the Cook County (Illinois) Public Defender’s Office, which last year handled more than 75,000 cases with a staff of about 700. It will be offered at an affordable price point to public defense offices around the country before expanding to private practices.

Each of the four companies received an initial $1,000 grant on being chosen for Tech Lab. Since mid-June, the company founders have been meeting virtually every week in sessions that allow them to learn from each other and from mentors.

“Meeting other founders in the legal tech space is so affirming, because in broader entrepreneurship communities it can be hard to find other people who have that affinity for access to justice,” Mehrotra said.

“Being surrounded by people who really care about making legal services widely accessible has been very encouraging. Also, the team has put a lot of work into connecting us with public defenders across the country. The connections have been invaluable.”

Tech Lab culminates on Sept. 25 with Demo Day, where founders will showcase their services before a panel of judges and compete for a $5,000 grand prize and a $2,500 runner-up prize.

Last year’s Demo Day winner, Durham-based Courtroom5, won for its subscription-model platform of tools, templates, and advice to help pro se litigants manage their own civil cases. The founders have since gone on to participate in the LexisNexis Legal Tech Accelerator and the Techstars Kansas City Accelerator.

Now in its fourth year, Tech Lab is supported by sponsors LexisNexis, Travelers Insurance, and the global law firm of Latham & Watkins. While previous cohorts have been larger – last year’s class also included seven start-ups with products aimed at the traditional legal market – this year seemed to call for a special focus on access to justice, Ward said.

“The world is more ready for change than ever. Traditional modes of conducting business have been disrupted and put on pause, and people — even lawyers — are more open to imagining new approaches,” Ward said. “It’s my hope that momentum continues to build toward using new technologies, exploring new service models, and even modernizing regulatory approaches to improve access to justice.”