Center for Firearms Law faculty gave more than two dozen media interviews on NYSRPA v. Bruen. In addition, their scholarship was cited in 60% of the amicus briefs filed in support of the respondent. 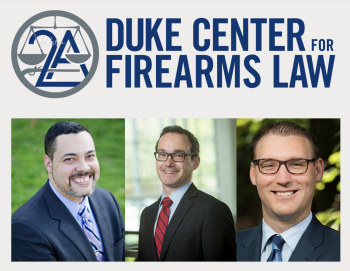 Faculty at the Duke Center for Firearms Law have been sought-after media analysts on gun rights and regulations as the Supreme Court considers New York State Rifle & Pistol Assn., Inc. v. Bruen, the first Second Amendment case on which it will rule in over a decade.

Beyond their presence in the media, scholarship by Blocher and Miller could also play a significant role in the outcome of Bruen: 60% of the amicus briefs filed in support of the respondents cited their work. Blocher, the Lanty L. Smith ’67 Professor of Law, and Miller, the Melvin G. Shimm Professor of Law and Associate Dean for Intellectual Life, are authors of The Positive Second Amendment: Rights, Regulation, and the Future of Heller (Cambridge University Press, 2018).

The high-profile case has drawn significant media attention in a Supreme Court session that also includes two cases involving state abortion laws. Bruen is the first major gun rights case the Court will rule on since 2008’s District of Columbia v. Heller and 2010’s McDonald v. City of Chicago, which extended the Heller ruling to states, and the first since the appointment of the three newest justices during the Trump administration.

While Heller affirmed the right to possess firearms inside the home, Bruen challenges the constitutionality of a New York law that requires applicants to show “proper cause” to receive a handgun carry license. Seven other states including California and New Jersey have similar requirements.

“About a quarter of the U.S. population lives in a state that has a gun law similar to New York’s,” Blocher told The New York Times. “If the Court strikes this law down, it could have a significant impact on the lives of tens of millions of Americans.”

Said Miller on the TV show Dan Abrams Live, “I think it would be fair to say that if the Court rules that you have a Second Amendment right to carry a firearm, simply on a desire to do so for self-defense, that you’ll see more guns in more places in America.”

Blocher, Miller, and Charles also discussed legal issues raised by the case on podcasts including Vox’s The Weeds, Strict Scrutiny, The NPR Politics Podcast, and the New Books Network podcast.

On the nationally distributed public radio show On Point, Miller discussed another possible consequence of the ruling: a doctrinal shift in the way Second Amendment cases are evaluated for constitutionality based on whether they have an historical analogue in text, history, or tradition.

“The real question is at what level of abstraction, what kind of analogies do you use, because obviously there were no jet airplanes in 1791 and the prohibition on a loaded pistol in the cabin of a jet airplane really didn’t arise until the 1960s,” Miller explained. “If the Court does adopt such a strict text, history, and tradition and analogy-only approach, how do you figure out whether a gun on an airplane is constitutional or unconstitutional?”

“If the Court adopts that test, then we could be looking, really, at a sea change in constitutional law and a sea change in gun regulations more broadly,” Blocher told NPR.

After oral arguments, Charles said in an appearance on Spectrum News that he expects the Court to strike down the New York law, but not to tell states they can’t require a license to carry a gun.

“They might say that New York has to do what 21 other states do, which is give you a license to carry a gun in public if you meet certain objective statutory criteria ... but that it can’t require you to show good cause or a special need to carry for self-defense over and above what other members of the community might have,” Charles said.

Since its August 2018 launch, the Center for Firearms Law has become a reliable resource on issues surrounding firearms, gun rights and regulation, and the Second Amendment through its prodigious scholarly output, influential Second Thoughts blog, and numerous events, including symposia and conferences.

In an event Nov. 11 at Duke in D.C., Blocher and Charles will discuss Bruen with Mary McCord, executive director of the Institute for Constitutional Advocacy and Protection at Georgetown Law. The conversation will focus on takeaways from the oral arguments followed by a Q&A.

Had a great time joining @TimBoyumTV on @NCCapTonight last night to talk about the takeaways from Bruen. https://t.co/s9B0Y9GCF1 #ncpol pic.twitter.com/3xchnTATyq