Duke Law's corporate, securities, and financial markets experts talked about the recent huge runup in GameStop and other "meme stocks," the ethics of short selling stock, and what actions regulators might take at a Feb. 4 lunchtime event. 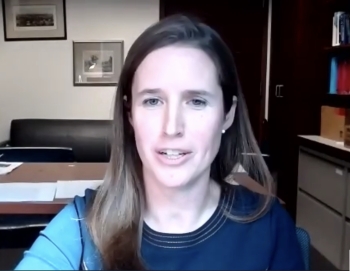 On Feb. 4, Duke Law faculty examined what happened with GameStop and other “meme stocks,” the legal and regulatory implications, and what the recent volatility means for the future of the stock market.

Following are excerpts from the discussion:

Gina-Gail S. Fletcher, professor of law and a scholar of complex financial instruments and market regulation

On whether hype on the Reddit board WallStreetBets that caused a surge of buying of GameStop and other “meme stocks,” driving up the price, constitutes market manipulation:

“It’s undeniable that with GameStop and AMC and the other ones, their fundamentals don’t match their current share price. Everyone wants to think of this as some form of market manipulation because of that disconnect. But from a legal standpoint, market manipulation requires more than that.

“There are two key points that we have to contemplate to see if we have some kind of violation of securities laws. The first is, was there any fraud as a part of what was going on with this meteoric rise of GameStop stock price? Based on what I have seen reported of what’s being said on these boards, this doesn’t really meet that level of fraud. What we’re normally looking for is some kind of misinformation, material misstatements as to what’s going on with the company. We’re thinking of your classic pump-and-dump scheme, where you spread misinformation about what’s going on with the stock where that stock rises, somebody then offloads their shares, and the stock plummets. That’s not what’s going on here.

“The second thing that’s really key to manipulation is intent. There needs to be some kind of intent, whether it’s specific or reckless, to manipulate the price, or the intent to engage in manipulative conduct. And based on what has been reported is being said on these Reddit boards, that intent, I believe, is probably missing. The [Securities and Exchange Commission] is combing through all this data and all these trades, combing through what’s been said and what’s been done to see if they are able to find those key elements that they would need in order to hold someone liable for market manipulation, or for fraud, or something along those lines. And maybe there is something there, but generally, based on what we’ve heard so far, I think it’s going to be a real difficulty for the SEC to make that case.”

On whether the market volatility caused by unusual volumes of trades is a problem to be addressed by the SEC or the Federal Reserve:

“To the extent that it is a problem at all, it’s going to be an SEC problem. The Fed only really becomes relevant if there’s some kind of systemic risk issue evolving and it’s being caused by its easy monetary policy. [Treasury Secretary] Janet Yellen and staffers from the SEC and other agencies are meeting to discuss whether there is any kind of common issue they need to be worried about. But these spikes and frenzied trading episodes are, as far as I can tell, so few and far between. Even the GameStop and the AMC trading, in the larger scheme of things, are relatively insignificant unless there starts to emerge a clear link between the easy money chasing the prices up. That’s when the Fed would become involved. And I venture to predict that after their meeting today they will simply say they’re watching it and monitoring it. I can’t imagine any Fed level action at this stage.”

On who was really involved in the heavy trading volume of GameStop:

“I’m generally a big supporter of short selling. I think it is the right way in the secondary market to determine what real value is there. Short selling leads to price discovery, meaning that you will find the price of a stock that is sustained by its real value. This price discovery was all well and good when many traders and hedge funds went into short selling. But when it turned the other way and the price started to go up, all of a sudden there were howls for intervention by the SEC, and hedge funds in particular were starting to squawk bloody murder. The irony is that the real big buying didn’t come from retail traders, it came from after-hours buying by hedge funds in huge volumes. There was far more than Robinhood and WallStreetBets involved there.”

On whether short sellers actually hurt a company:

“Shorting doesn’t cause companies to fail. It’s the other way around. If you are a hedge fund and you notice that a company is doing poorly and you think it’s in financial distress and things are going to get worse, and that’s not fully reflected in the current company market price, then you have an incentive to short the stock and make money if the stock drops even further. But it’s not the shorting that caused these problems for GameStop. It’s exactly the reverse. Pre-pandemic, you can see that there were already signs of big trouble for GameStop. The company was already not doing well, and that caused funds to come in and short the stock.”

On Robinhood’s explanation for halting trading, saying that it lacked adequate cash for the collateral required by clearinghouses to process the high volume of margin trades:

“After Robinhood and a few other retail brokers limited their customers’ trading in GameStop and a few other meme stocks to only ‘sell’ orders, this naturally put downward pressure on the share price. If you can only sell a stock, it’s natural that it’s going to decline in price. When Robinhood did this it infuriated the WallStreetBets crowd and a few other prominent social media personalities like Dave Portnoy, and so this led to all sorts of conspiracy theories that Robinhood had caved to pressure from hedge funds that had been losing their shirts in the short squeeze. And of course the truth is far less sinister, probably pretty boring to most people if I’m being frank.”

On limiting retail investors’ use of leverage to purchase stocks or derivatives:

“We need to re-examine this whole process about who can get leverage. There’s leverage you can get by margin, but also leverage you can get by buying options rather than trading in stock. And maybe we ought to have some collars on that in terms of qualifying by what your capital is. These things are clearly within the SEC’s path to prescribe.

“We’ve never been at a point where we’ve had an incoming chairman of the SEC (nominee Gary Gensler) who is more qualified to take on these questions. So we are at a good crossroads. We’ve just got to confirm this person and get some data and then we will figure out what the problems were and figure out how to correct them.”

On what market volatility means for the companies whose stock is suddenly being bought and sold at huge volumes:

“If you are an issuer, if you are GameStop or AMC or Nokia or Bed Bath & Beyond, you are really in an interesting spot right now. You own this company and your share price is skyrocketing and people really want to buy your stock. And you might want to capitalize on this and sell them some stock. There are some problems with this. First, you might miss the window. But more specifically, you’re in kind of an uncomfortable position. Presumably most of the rest of the market knows that your current fantastic stock valuation is not actually based on how good your business is.

“What’s going to happen is eventually there will stop being such a frenzied buying of these stocks. This has already started to happen, and the price will go back down to something that more realistically reflects the value of the company, and potentially that means it could go down pretty far. And then the people who bought it from you when the price was high will be upset and they might want to sue you. So from a practical legal perspective, if you are an issuer and you do decide to do an offering to take advantage of these share prices, you need to be super, super careful about what you say. ... You really, as an issuer, want to avoid even the appearance of selling securities at a value you know to be inflated under false pretenses.”