The International Society of Military Ethicists presented Dunlap with its highest honor at its annual conference this month. 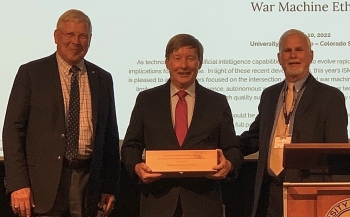 Dunlap received the Brigadier General Malham M. Wakin, USAF (Ret.) Founders Award for lifetime achievement and service in the field of ethics and the military profession. It was the third time the organization has presented the award.

The International Society of Military Ethicists is an organization of military professionals, academics and others formed to discuss ethical issues relevant to the military. This year’s conference theme was “War Machine Ethics.”

The society’s president, Lt. Gen. Chris Miller, USAF (Ret.), presented Dunlap with the award, citing his leadership “in and out of the uniform as a thinker and a doer.” Dr. George Lucas, Distinguished Chair of Ethics Emeritus, U.S. Naval Academy, called Dunlap “a force of nature,” recapping his career and contributions to the broader understanding of ethics and law in national security and military service.

Dunlap retired from the Air Force in June 2010 after a 34-year career in the Judge Advocate General Corps, during which he achieved the rank of major general.