Note: The following article appeared in E&E News' Climatewire publication on May 21. Because it is behind a paywall it is being provided here. 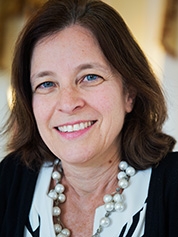 These economic all-stars want to crack the climate code

Subscribers can view the story online by clicking here.

Sarah Bloom Raskin is no stranger to complex financial issues. But when the former Federal Reserve governor attempted to dig into the intersection of climate change and financial regulation more than a year ago, she ran into an unexpected problem. There wasn't much out there.

It was spring 2020, and Raskin was growing increasingly concerned that climate change — like the coronavirus crisis — could upend global financial stability.

But when the Obama-era official wanted to learn more, she found a dearth of U.S. expertise on the issue, which was already being tackled by regulators and academics in Europe and elsewhere.

"If an invisible virus could upend our world, then so could the warming of the planet," Raskin, who is also a former deputy secretary of the Treasury Department, told E&E News.

So she decided to do something about it.

Enter the Regenerative Crisis Response Committee, an independent body with an awkward name that Raskin helped launch. Its mission? Examine the issue, develop progressive solutions and inform policymakers' efforts to address the economic perils of a warming world.

The 11-person committee, which received funding from the William and Flora Hewlett Foundation, comprises a constellation of economic and financial luminaries. These former regulators, White House advisers, leading economists and studied academics believe in the gravity of rising temperatures — and have direct lines into the Biden administration, independent financial agencies or both.

"We needed to bring together a group of people who could start to discuss from an economic and financial regulatory [perspective] what climate chaos could mean from a risk [point of view]," Raskin said. "And then of course to determine what kind of tools were available to help steer us through this transition.

"These are highly influential and engaged people," she added. "So the ability of anybody on the committee to bring forward ideas is really unlimited."

Among the group's ranks is Joseph Stiglitz — a Nobel Prize-winning economist, Columbia University professor and former senior vice president of the World Bank. He is also a leading expert on carbon pricing.

But Stiglitz's climate-related background appears to be an exception, not the rule. Most of the other committee participants have predominantly focused their careers on economic and financial systems — not environmental issues.

That was an intentional move, multiple committee members said during interviews, because the idea was to convene independent and forward-thinking experts who could help policymakers retrofit existing systems and structures to address a risk that is just now gaining traction in the highest levels of the U.S. government.

"If you look at the composition of the committee, you'll see essentially a real intellectual curiosity, individualistic views, people who might approach this in different ways," Raskin said. "The common thread is, we don't waste any time on debating whether climate change is real."

Lisa Cook is one of these bold-faced names. Currently a professor of economics at Michigan State University, she previously served as an Obama-era senior economist on the Council of Economic Advisers, held multiple positions at Federal Reserve banks and was a senior adviser in the Treasury Department.

Although the group is new, even its alumni are going places. Leonardo Martinez-Diaz, formerly of the World Resources Institute, was previously on the committee, according to a press release. Martinez-Diaz served on the Biden transition team and since has been tapped to be a senior adviser to White House climate envoy John Kerry.

"That's a lot of big names," said Jennifer Schulp, who directs financial regulation studies at the libertarian Cato Institute. She observed that many of the committee's members have "connections with — and an ear of — parts of the Biden administration."

That's one reasons why she thinks the group "has the potential to be influential on Biden administration policy."

But another key element, she added, is that although there has been increasing dialogue and research in the United States about how to measure and curb climate-related financial risks, detailed policy recommendations have been "few and far between."

The "RCRC" was born in part out of Raskin's observation that U.S. financial experts and policymakers weren't attuned to climate issues — and vice versa.

But COVID-19 played a role too. Committee member Jay Shambaugh, a professor at George Washington University, said the pandemic exposed the economy's vulnerability to systemic shocks — and the change that can come when policymakers unlock trillions of dollars in public spending to keep families and businesses afloat.

"This is a moment where bigger and new ideas to reshape the way the economy functions are being actively considered and debated," said Shambaugh, who worked on energy and environmental issues as a member of President Obama's Council of Economic Advisers and served on the Biden transition team.

As he sees it, the group's main goal is to meet the moment by pushing bold, climate-related policy ideas whether by "talking to people on the Hill or talking to people in the administration."

Those ideas could take several forms.

According to the Hewlett Foundation's Marilyn Waite — who was instrumental in brainstorming and funding the initiative — the committee is developing ideas that it plans to elevate via white papers, op-eds, forums with regulators and more. As it stands, it will do so mostly in advance of the global climate negotiations set to take place in Glasgow, Scotland, this November.

Many of the policy ideas themselves are still being developed or haven't yet been publicized. "Keep your seat belts on for that," Raskin said.

But a few proposals have trickled out.

"We know the housing stock has got to be net neutral by 2050. We know we're a very long way from that," he said. "A very large part of the American mortgage market is already under the influence of public subsidy. Why not redefine the conforming mortgage that Fannie Mae and Freddie Mac are willing to write as a green renovation mortgage?"

He laid out that argument in an op-ed last week. "By 2050, all Americans, whether homeowners or tenants, should be able to live in homes that are efficient, clean and healthy, that do not burden them with excessive utility bills and do not contribute to the climate crisis," Tooze wrote.

That's just one issue under consideration. Other committee members are zeroing in on ideas in their realms of expertise that touch on everything from fiscal and monetary policy to financial regulation.

Economist and RCRC member Stephanie Kelton, for example — who was the former chief economist on the Senate Budget Committee's Democratic staff and a senior economic adviser to Bernie Sanders' presidential campaigns — is more focused on what she called the "pay-for" question.

She said she thinks the climate-related spending proposed so far by the Biden administration is "quite modest" and "too reliant on something that we just can't count on, which is the private sector doing a significant part of the heavy lifting here."

"I personally would like to see more public funding, federal dollars, and faster," Kelton added. "So, where my voice comes in is pushing in those directions."

To be sure, it's not as though the committee is the only U.S. group tackling these issues. Progressive think tanks, environmental organizations and some academics also have floated solutions and called on policymakers to take climate finance seriously.

"If the administration is going to do action on climate ... these are the people that they're going to call and want the opinions of," Gellasch said. "And to the extent that they are using the shared brainpower of each other to propose, and refine and improve their thinking, that's great.

"This is a hell of a collection of talents," Gellasch added. "Now the question is what are they going to do."