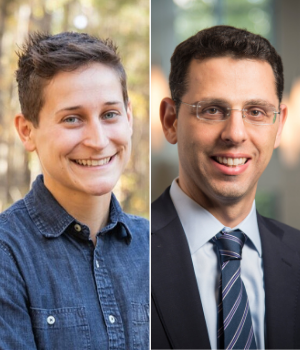 A paper co-authored by Associate Professor Ofer Eldar and Chelsea Garber ’23, PhD ’20 has been selected for presentation at the annual meeting of the American Economic Association (AEA) in January 2021. The paper, entitled “Do Governments Play Favorites? Evidence from Opportunity Zone Funds,” examines the Opportunity Zone program (OZ), introduced in 2017, an economic development program that grants tax credits to develop distressed tracts in low-income communities.

The study is particularly timely in light of ongoing public debate on policies to induce corporations to address social problems, said Eldar, who holds secondary appointments in Duke’s economics department and at the Fuqua School of Business.

Eldar and Garber discovered their common interest in OZ programs when Eldar presented a paper about social enterprises in Duke’s economics department, where Garber was working toward her PhD in economics. Garber is interested in a career in legal academia.

Eldar believes the joint paper may be the only one exclusively by legal scholars to be accepted by the highly selective conference, held annually by the AEA. The meeting, which attracts more than 13,000 economics scholars to hear current papers on general economics topics, will be held virtually in 2021.

Eldar and Garber spoke with Duke Law Communications about their collaboration.

Your study analyzed empirical data on the relationship between political support for governors and the areas those governors selected to receive federal tax credits for development. What did you find?

Eldar: Our main finding is that if we look at tracts that had largely the same characteristics as the ones that governors may have preferred due to voter or investors’ support, the latter seem to have had a greater likelihood of being selected. Our study suggests that nearly 10 percent of the OZ tracts would probably not have been selected had it not been for voter or investor support of the governor, and many of these are relatively wealthy tracts.

Based on our simulation, the tracts that would likely have been selected had political support not been a factor are likely to be poorer and arguably more deserving of assistance. On the bright side, this also means that governors do actually take into account poverty and employment measures, and overall the selected tracts were, on average, in greater distress than non-selected tracts.

There are many who touted the program as a path-breaking solution to drawing the private sector into distressed areas. But others have expressed skepticism. What is clear, however, is that there is a growing industry of advisors and funds that seek to take advantage of the program. We are carefully monitoring the outcomes.

What are some of the more egregious examples of relatively wealthy tracts that were selected for the program?

Garber: There are many examples. A few that stand out are the following: a tract in Portland, Ore., that experienced 600 percent growth in median family income between 2010 and 2017, and was already in the 93rd percentile; a tract in Houston, Texas, that marginally qualified for selection based on the 2015 poverty rates, but by 2017 had a median family income of $250,000; and two tracts in Detroit with high-end office space tenants including Microsoft and JP Morgan that have been described as “islands of wealth” compared to the surrounding poor areas.

Why was potential for favoritism greater in OZ than similar programs, and how can it be designed to eliminate bias in the future?

Eldar: What is unique in the OZ program is that governors were given essentially unfettered discretion to designate tracts from a very large number of low-income tracts. In the Empowerment Zone (EZ) program, the tracts were essentially determined through a centralized process. In other programs, such as the Community Development Financial Institution (CDFI) and New Markets Tax Credit (NMTC) programs, there is a specialized agency, the CDFI Fund, that selects firms that invest in low-income areas based on the quality of their applications, and their proven track record in promoting development. The OZ program has the advantage of great flexibility, and in this respect it could be more effective than the EZ program. However, it lacks a merit-based process, which leaves open the possibility of creeping favoritism, and potentially less effectiveness.

We believe that there should be more discussion of how to define the beneficiaries of the development programs. Under the CDFI program, firms get tax benefits based on the merit of their applications and specific promises to assist low-income communities. The OZ program should ideally borrow the merit-based approach of the CDFI Fund, but develop a more streamlined and flexible process for approving selections. And there are some other obvious deficiencies with the program. For example, there is no transparency at all with respect to who benefits from the tax credits, although some funds have voluntarily disclosed their investments. More data would surely be helpful in evaluating the overall welfare impact of the program.

What sparked your interest in researching law and economic development?

Garber: Prior to and early in my PhD program, my work focused more on racial discrimination in the criminal justice setting. With that as my jumping-off point, my work naturally evolved to studying low-income community development. Specifically, in 2014 I read a newspaper article about a subsidized affordable housing project here in Durham that mentioned the use of a federal tax credit. That article really provided a spark and I began researching federal policies intended to promote development in low-income communities. As soon as the Opportunity Zone program became public, I did some preliminary research and knew the unique program would be worth studying. I came to law school to better understand the legal framework in which these tax policies and administrative regulations function. I also hope to gain a "boots on the ground" perspective on how to draft and implement these policies so that the impact is consistent with the supposed intent.

Eldar: I do research on social entrepreneurship, and how to make capitalism address social goals. It’s an area that overlaps with subsidy programs to promote development. One of the most important developments in the area of social impact was the Opportunity Zone funds. The purpose of the program was to provide incentives for private equity and real estate funds to invest in low-income communities. The gist of the OZ program is actually in the spirit of my work on social enterprise, which highlights the accomplishment of community development financial institutions in increasing access to capital in low-income communities. There are, however, some major concerns with the implementation of the OZ program, as Chelsea and I argue in our paper.