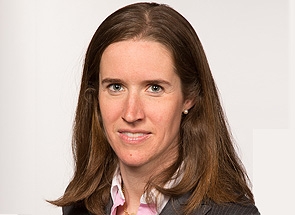 Elisabeth de Fontenay, an emerging scholar of corporate law, corporate finance, and financial institutions, will join the Duke Law governing faculty on July 1 as an associate professor of law.  She comes to Duke from Harvard Law School where she has served as a Climenko Fellow and lecturer in law since 2011; she earlier practiced law for more than six years at Ropes & Gray in Boston, where she specialized in mergers and acquisitions and debt financing.

“Elisabeth is a stunning recruit for the law school,” said James Cox, the Brainerd Currie Professor of Law.  “Her six plus years of transactional experience situated her at the frontiers of highly unregulated, but increasingly important, spaces of corporate debt markets. These markets have exploded in the last few years and Elisabeth has worked in the area from the areas of taxation, corporate finance, and private equity. This experience and her sheer intelligence will assure great success in the classroom and as a top scholar. We are excited to have her join the faculty.”

“It is wonderful to welcome a young scholar of Professor de Fontenay’s caliber to Duke Law School,” said Dean David F. Levi. “She joins an already strong group of business and entrepreneurship faculty and will give us an even greater presence in the study of financial markets and business entities.  She will teach courses that are at the heart of our business law curriculum, and our students will greatly benefit from her as a teacher and mentor.  I could not be more delighted that she will be joining us.”

“I stayed in practice far longer than I intended because it was so much fun,” de Fontenay said with a laugh.  “It was a very exciting time to be in practice because it spanned the 2005-2006 ‘boom’ period and then the financial crisis and recovery.  Since I was doing a lot of debt work at the time, it was as busy – or possibly busier – when everything started collapsing and had to be restructured.”

Admitting to a “natural tendency” to think in terms of high-level theory, de Fontenay said practicing helped her understand that theory can depart “quite substantially” from reality.

“Now, instead of taking a top-down approach, I take more of a bottom-up approach, where I try to get the facts on the ground and see what the actual parties are doing in the financial markets and build back up from that.”

That is the approach de Fontenay took in her current project and forthcoming paper, which posits that private equity firms create value by acting as gatekeepers in the debt markets, not just by offering corporate governance advantages.

Having represented both private equity-owned and Fortune 500 companies in her practice, de Fontenay said she was struck by the favorable terms her private equity clients were able to get in the debt markets.

“The terms the private equity firms were able to get were just astonishing,” she said.  “They were taking on huge amounts of debt in the companies that they acquired, which normally would make them very risky and which, in turn, would usually entail very bad debt terms.  Yet they got incredibly good terms compared to similar companies that weren’t private equity-owned.  There wasn’t as big a contrast as one would expect from the terms obtained by well-established Fortune 500 companies that were borrowing very small amounts.  I spent a lot of time thinking about why that might be the case.  And that’s where I hit on this idea that what private equity companies are doing and the value they’re bringing to companies is the ability to borrow ‘cheap’ debt.  Because they’re always in the debt markets, they establish reputations with lenders.  Lenders know what they’re getting; even though the companies change each time, they trust the product because the private equity firm stands behind it.”

Applying a repeated-game model to her hypothesis, among other analytical methods, de Fontenay demonstrated that private equity firms indeed offer their portfolio companies a borrowing advantage.

“As repeat players, private equity firms use their reputations with creditors to mitigate the problems of borrower adverse selection and moral hazard in the companies that they manage, thereby reducing creditors’ costs of lending to these companies,” she writes in her paper titled “Private Equity Firms as Gatekeepers.”

Establishing what private equity actually does and how it brings value to portfolio companies carries significant regulatory implications, de Fontenay points out; in her paper, she expresses concern over the Dodd-Frank Act’s provisions for regulating private equity firms as investment advisers – making them more accountable to their own investors –  if financial engineering is, indeed, the chief value they offer.

“That might sound like a good idea, but it turns out to have negative consequences.  If you tighten the leash on the private equity firms, they can’t act as effective gatekeepers, because if they are strictly accountable to investors in every deal and in every fund, they have to maximize profits all of the time.  It means they can’t prioritize their long-term reputation with creditors by, say, taking a bath on one deal to shield creditors from big losses.  They have to be, in a sense, adversarial towards creditors all the time.”  De Fontenay is quick to note that her theory does not address proposals to change the way private equity firms and managers are taxed.  “My view is agnostic in that regard,” she said.  “Showing that private equity creates value doesn’t automatically entail that it should be subsidized.”

De Fontenay intends to focus her broader research agenda on the least regulated areas of the financial markets.  “I am interested in finding out what’s going on in those markets – how private actors solve problems without regulatory intervention and whether that actually works,” she said.  “Actors in the financial markets get very creative at solving problems.  Sometimes that’s a very good thing.  But sometimes the solutions private actors come up with create systemic risks for the economy as a whole.  I am interested in trying to figure out what conditions favor a hands-off approach, and what conditions demand regulatory attention.”

She looks forward to joining the Law School’s “stellar faculty” and working with scholars like Steven Schwarcz, the Stanley A. Star Professor of Law and Business, and Cox, an expert in corporate and securities law who she called “a luminary – and a wonderful person.”

Duke Law’s size also attracted her, said de Fontenay, who will teach Corporate Finance and Business Associations in the next academic year.  “I think the students are incredibly lucky, because they get so much individual attention from faculty, yet still get all the resources of the university and a very impressive array of courses to guide them in their interests.