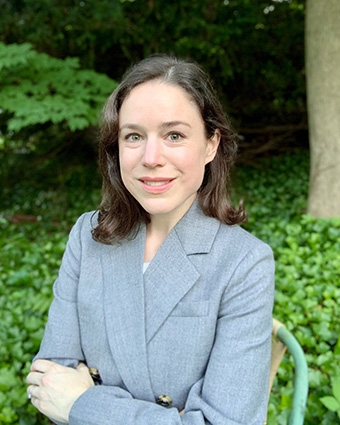 For more than a decade, Mara Revkin has been conducting immersive field research on legal systems and social change in conflict-torn societies in the Middle East and North Africa. Her goal, she says, is to use empirical research to help policymakers and practitioners develop evidence-based strategies to build peace, security, and respect for human rights, and mitigate the root causes of violence and armed conflict.

Revkin, who is fluent in Arabic and earned both a JD and PhD in political science at Yale, has focused much of her empirical research on the experiences of Syrian and Iraqi civilians who were living in areas captured in 2014 by the Islamic State (IS), an Islamist insurgent group that established an authoritarian system of governance purportedly based on the original seventh-century “caliphate.”

Having earlier worked and conducted research in Oman and Egypt before and during the Arab Spring and more recently with United Nations agencies and other humanitarian organizations in Iraq and Syria, she has crafted an ambitious research agenda that incorporates international and comparative law, human rights, transitional justice, criminal law, and property. Revkin will join the Duke Law faculty as an associate professor on July 1, after completing a fellowship at Georgetown University’s Center on National Security and the Law.

While at Georgetown, Revkin took a service leave of absence for six months to serve as an advisor to the United Nations in Iraq. Based in Baghdad, she led the drafting of an interagency assessment to inform the U.N.’s engagement with the Iraqi government’s efforts to repatriate more than 30,000 Iraqi nationals with perceived or actual ties to the Islamic State, including many children and wives of IS fighters, who have been confined to closed camps and prisons in northeast Syria since the group’s defeat there in 2019.

“Mara Revkin is recognized globally for her exploration of some of the most cutting-edge questions in national security and international and comparative law — from how proscribed groups like IS use governance to gain legitimacy to how human rights violations by governments make populations more sympathetic to these groups to the role of multilateral institutions like the U.N. in developing relevant norms,” says Clinical Professor Jayne Huckerby, who directs the International Human Rights Clinic. “We will benefit immensely from her unique insights on fact-finding, ethics, standard-setting, scholarship, and advocacy on these and more questions.”

Revkin will teach a seminar on transitional justice in the fall semester and Property in the spring. Her research has identified property rights and ownership as important factors in state-building, migration and displacement decisions, and peacebuilding processes in Iraq, Syria, and other conflicts where airstrikes have resulted in mass casualties and catastrophic damage to buildings and infrastructure, prompting civilians to demand accountability and compensation.

A native of New Haven, Conn., home to a major resettlement program for refugees since 1982 and one of the first “sanctuary cities” to adopt policies that protected the rights and safety of undocumented immigrants, Revkin grew up in a community that took pride in welcoming people from around the world who had fled violence and economic hardship in their countries of origin. After the terrorist attacks of Sept. 11, 2001, when Revkin was in her first week of high school, the wars in Afghanistan and Iraq brought a growing number of Afghan and Iraqi refugees to New Haven, which contributed to her interest in the Middle East and conflict-related migration. As an undergraduate at Swarthmore College, she studied Arabic, spent a semester in Cairo, Egypt, and reported on immigration issues as an intern for The American Prospect.

After college, Revkin spent a year living in Oman in on a postgraduate Fulbright fellowship, where she interviewed female poets who were writing about the changing role of women in Omani society and who also sometimes used their art to “subtly and creatively express dissent” amid pervasive government censorship of the media.

Revkin’s Fulbright project confirmed her commitment to field research and furthered her interest in the ways citizens organize outside of the state when they have grievances with their governments. As a junior fellow at the Carnegie Endowment for International Peace at the start of the Arab Spring in 2011, she explored legal and constitutional reforms spurred by these largely peaceful protest movements, the focus of several early published works. One article, which emerged from fieldwork in Egypt’s Sinai Peninsula during her 1L summer in 2013, when she interned for the Cairo office of Human Rights Watch, found that residents of North Sinai often preferred to resolve disputes through non-state Islamic courts due to their “growing disillusionment with state and tribal judiciaries, which are often viewed as complicit in the disenfranchisement of the Bedouin and expropriation of their lands.”

The rise of IS, coinciding with the start of Revkin’s legal and doctoral studies, led her to shift the focus of her research from peaceful activism to movements that use violence to purse their political goals. Her work shows how IS exploited the grievances many Iraqis and Syrians held towards their governments, which were failing to meet citizens’ most basic needs for security and services while also engaging in repression and sectarian discrimination against Sunni Arabs (both the Iraqi and Syrian governments are Shia-led). “IS used the perceived failure of the Arab Spring to argue that peaceful activism ineffective and violence is the only way to achieve social and political change,” she says.

But through a series of empirical studies, including a door-to-door survey of more than 1,400 residents of Mosul, which IS captured in 2014 and controlled as its capital until 2017, Revkin demonstrated that violence was not the group’s only tool. Rather, it gained acceptance and cooperation from local populations through its development of a system of governance that promised a reprieve from the past and an improvement in their lives.

“IS offered an alternative system of law, order, and governance — including its own courts, police, and legislation-like rules — that initially appealed to a critical mass of Syrians and Iraqis whose governments were failing to provide justice, basic services, and security,” Revkin writes in a paper presented to the faculty, “Insurgent Legality: The Rise and Failure of the Islamic State in Iraq and Syria,” which she is also developing into a book. “However, these same institutions ultimately contributed to the Islamic State’s collapse as the group failed to fulfill its ambitious promises and became increasingly corrupt, repressive, and discriminatory over time.”

The elements of IS statecraft Revkin has studied include its constitution-like “Charter of the City,” which set out reciprocal obligations between the self-described “caliphate” and its citizens. One award-winning paper charted the uptick in burdensome and coercive revenue-raising policies the group implemented in Syria as it faced increased military pressure.

Revkin’s comprehensive study of IS also included in-depth interviews with more than 300 Iraqis and Syrians who lived under its rule, observation of trials of alleged IS members, and the door-to-door survey of 1,458 residents of Mosul that resulted in several publications. One on displacement decisions in Mosul found that even though many residents of the city were opposed to IS, it was very difficult for them to leave due to IS’s severe restrictions on travel, and because they feared leaving property and family members behind. These “stayers” were then widely perceived by IS victims as “collaborators” even if they were only cooperating in order to stay alive and did not directly participate in violence.

While the prospects of reconciliation seem dim in such places as Sinjar, where IS committed a genocide against the Yazidi ethnoreligious minority, she found in two related coauthored studies that preferences for punishment and reintegration of different types of “collaborators” depended heavily on their closeness to the group and on the severity and voluntariness of their association. Wives of fighters and cooks who prepared food for fighters, for example, were treated more harshly than IS municipal service workers who did not work directly with fighters. Revkin contrasts these nuanced perceptions with the blunt “one-punishment-fits-all” approach taken by the Iraqi government, which detained more than 19,000 Iraqis on terrorism-related charges between 2014 and 2018 in what many perceive as collective punishment. Her research warns that new grievances with state-perpetrated injustice increase the likelihood of future conflict.

Those insights have made Revkin’s research relevant to U.N. agencies in Iraq and Syria. Since 2017, she has conducted research with and advised U.N. agencies on a range of topics including transitional justice and the prospects for reintegration of children recruited by armed groups, security sector reform through community policing, and community-based reintegration of Iraqis with family ties to the Islamic State.

“As an academic, it has been the learning experience of a lifetime to play a very small part in supporting the work of humanitarian practitioners and policymakers in Iraq and Syria,” she says. “I am very excited to bring what I have learned to Duke through my teaching and look forward to mentoring students with research or career interests in human rights, peacebuilding, and transitional justice.”

Revkin’s work relating to IS maps a new research agenda for the study of insurgent groups’ legal systems. “The key policy implication is that until states are perceived as legitimate by their citizens, which will require major reforms to address corruption, strengthen rule of law, and protect human rights, violent non-state actors like IS will continue to exploit citizens’ grievances to build support for their alternative systems of order,” she says.

In addition to advancing that seminal research at Duke, she is bringing a host of other projects to her faculty post, including one that examines the effects of the American Civil War on the development of police institutions and a coauthored multi-country study of the effects of racial and gender bias on citizen-police relations in Uganda, Liberia, the United States, and Iraq.

“I am incredibly lucky to be joining the law faculty at Duke and will do my best to pay this opportunity forward to my students and colleagues,” Revkin says.