The FCC and the Future: A conversation with Julius Genachowski

Genachowski was one of several communications law experts from academia, government, and the private sector who gathered for the symposium, titled “The FCC and the Future." Interviewed by Stuart Benjamin, Duke’s Douglas B. Maggs Professor of Law and the FCC’s inaugural distinguished scholar in residence, Genachowski  covered a wide range of topics during the keynote conversation.

“I am, as many of you are, so incredibly excited about the opportunities of the broadband infrastructure that we see rolling out in the United States, wired and wireless, high speed, potentially connecting everyone,” he said. “The United States leading the world in innovation, leading the global economy in the 21st century as we did in the 20th, will only happen if we seize the opportunities of this extraordinary platform.”

Genachowski acknowledged that broadband availability and use is a looming problem for communications technology in the United States.

“When it comes to broadband deployment and adoption, we’re just not where we need to be as a country,” he said. “There are still about 24 million Americans who live in parts of the country where they have no broadband infrastructure at all. We have over 30 percent of the country who could get broadband, but haven’t signed up. We’re at about a 60 percent penetration rate. What does that mean? Well, Singapore is at 90 percent. If you consider it a basic platform for participating in the economy, participating in our democracy, a basic platform for innovation, that’s just not good enough.”

Because of vastly increased demands on mobile broadband spectrum made by increasingly powerful and complex devices like smartphones, there will be a demand for about 35 times more spectrum than is currently available over the next five years, Genachowski said.

“The amount of spectrum that we have at the FCC that we can put online for mobile broadband represents about a two-and-a-half or threefold increase over what we have now,” he said. “That’s a scary gap.”

Genachowski said “there is no one silver bullet” for addressing the mounting need for more spectrum, but he did advocate for incentive auctions, a policy proposal which has been a hallmark of his FCC tenure.

He called the proposal, in which entities currently licensing broadcast spectrum could receive compensation for relinquishing their spectrum for FCC auction, “the next major policy innovation.”

Benjamin concluded the session by asking Genachowski if he had any advice for the law students in the audience. Having spent two decades in various public and private sector endeavors after graduating from Harvard Law School and clerking on the D.C. Circuit and for two Supreme Court justices, Genachowski advised students to take chances.

“Be expansive about what your options really are,” he said. “I would say that the FCC, when I went there, was not a conventional choice. But if you’re at a place like this incredible law school, by definition you’ve earned a strike or two before you strike out. Use them. Take a chance on doing something that you think may have 100 percent certainty of working out, but could be your real calling and the most fun that you’ll have.”

View the webcast of the keynote discussion. 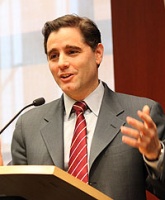