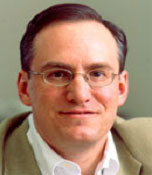 Durham, N.C. September 29, 2004 — Curtis Bradley, a noted scholar whose area of expertise in national security and foreign affairs law puts him at the expanding intersection of constitutional and international law, will join the Duke Law Faculty effective July 1, 2005.

“Professor Bradley is a perfect hire for Duke Law School,” said Katharine Bartlett, Dean and A. Kenneth Pye Professor of Law. “His interests will contribute significantly to Duke University’s existing strength in two of the Law School’s most active interdisciplinary programs: the Program in Public Law and the Center on Law, Ethics, and National Security. With the addition of Professor Bradley, Duke Law School has a presence in the increasingly important area of foreign relations law that is second to none.”

Bradley is currently a professor of law at the University of Virginia, where he teaches courses in international law, international litigation, federal courts, and foreign affairs law. Since January 2004, he has been serving a one-year term as Counselor on International Law in the Legal Adviser's Office at the U.S. State Department. In the summer of 2004, Bradley served as the Director of English Studies at the Hague Academy of International Law.

“I am thrilled about my upcoming move to Duke,” says Bradley. “The school’s strengths in constitutional law, international law, and national security law make this a perfect fit for me, and I am very attracted to the collegial culture and interdisciplinary focus at Duke. With its wonderful location in the Research Triangle, excellent student body, accomplished faculty, and energetic leadership under Dean Bartlett, Duke is arguably the best place in the nation to teach and study law.”

Bradley has published numerous articles in the fields of international law and U.S. foreign relations law, including articles in the Harvard, Stanford, Michigan, Virginia, Pennsylvania, Duke, and Georgetown law reviews. He is also the co-author of a casebook on foreign relations law and a casebook on international law. An honors graduate of the University of Colorado and Harvard Law School, he joined the UVA law faculty in 2000 after a one-year visit. Prior to this, he served as a law clerk for Judge David Ebel on the United States Court of Appeals for the Tenth Circuit, and for Justice Byron White on the United States Supreme Court. He began his career as an associate at Covington & Burling in Washington, D.C., and began teaching at Colorado in 1995.

"The Bradley appointment is tremendously exciting for Duke's Program in Public Law,” said Christopher Schroeder, Charles S. Murphy Professor of Law and Public Policy Studies and director of the Program in Public Law. “In coming to a faculty that already is blessed to count Jeff Powell, Erwin Chemerinsky and Scott Silliman among its members, Bradley solidifies Duke's claim to having the strongest faculty in the country focused on U.S. constitutional issues raised by the war on terror, such as the limits of executive authority, the protection of civil liberties, and the role of international law in our constitutional system."