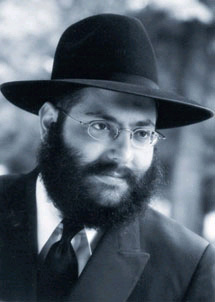 The Judaic Themes in American Law Speaker Program hosts Rabbi Yosef Y. Jacobson on Thursday, Feb. 26, to discuss "What Role Does Religion (God) Play in The Courtroom." During his talk, Rabbi Jacobson will re-examine the Ten Commandments case from a Jewish perspective on separation of church and state, and discusses the case pending in the Supreme Court concerning removal of the words "under God" from the Pledge of Allegiance. Lunch will be provided.

Rabbi Jacobson, one of the most sought after Jewish speakers in the world today, has lectured to Jewish and non-Jewish audiences on six Continents. A teacher of Jewish law and Kabbalah at the Rabbinical College Covevay Torah in New York, Rabbi Jacobson's weekly Internet essays on Judaism, mysticism and psychology are read by tens of thousands the world over. An exceptional orator, he has touched thousands with his deep, intuitive grasp of the human condition and his remarkable ability to explain the ancient Jewish wisdom of the mystical texts and inspire his listeners with its relevance to their daily lives. His lectures throughout Asia, Israel, Europe, Australia, South Africa, North and South America were attended by many thousands, who flocked to listen to Jacobson's profound thoughts peppered with an incredible sense of humor.

The talk will take place at 12:15 p.m. in Room 4047. For more information, contact the Student Director of the Series, David Breau at david.breau@law.duke.edu.