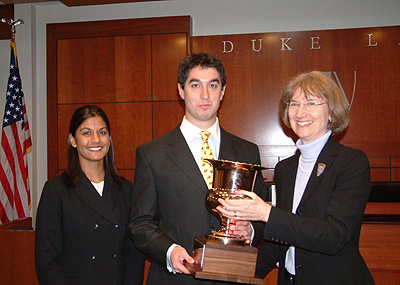 Jonathan Krause'04 successfully argued his way before an intimidating bench of federal judges winning the 2004 Dean's Cup on Feb. 13. Krause's victory was hard fought against his opponent, Shireen Matthews '04, who argued the respondent position.

The case for this academic year's Dean's Cup Competition was Locke v. Davey, which is currently before the Supreme Court. Based upon the First Amendment promise of free exercise of religion, the case confronts whether a state educational scholarship can be used for theological study at a public university. The Dean's Cup case and appendix were the same as those used by the Appellate Practice class.

Krause and Matthews said they prepared for the competition by practicing together and said that it made the experience more collaborative than competitive. When asked what advice they have for future Moot Court competitors, they said in unison, "practice!"