“Planning the event this year was a very rewarding experience. Working so closely with the placement organizations as well as our own Office of Public Interest and Pro Bono truly allowed me to experience the commitment people have toward justice and the public interest,” Richardson said. “It amazes me that such talented people have put personal gain aside to help others and ensure that our legal system truly helps those in need. I hope to be involved with the program in some way again, as I have taken so much from the experience.”

David Bernstein ’06 and Scott Edson ’05 worked with the Appalachian Citizens Law Center (Appalred), a free legal service for low-income individuals and familes that is based in Kentucky. Appalred focuses on coal-related issues, so much of the students work involved researching United Mine Workers of American pension claims and surveying property damage caused from coal mining, as well as family law issues such as drafting divorce and child-custody papers.

Three students, Greg Kanyicska ’05, Ian Millhiser ‘06 and Janey Rountree ’05, traveled to Jackson, Mississippi to work with the Mississippi Center for Justice, a newly established organization that was created with the help of a grant from the Stern Family Fund, and is headed by Martha Bergmark, the former acting director of the national Legal Services Corporation. At the Center, students worked with incarcerated children in connection with a large-scale reform effort of the juvenile justice system in Mississippi. The Center is collaborating in this effort with the Southern Poverty Law Center further to an investigation by the U.S. Department of Justice that exposed atrocities against children in two Mississippi training schools.

The students put pen to paper to share their stories, and three are included here. 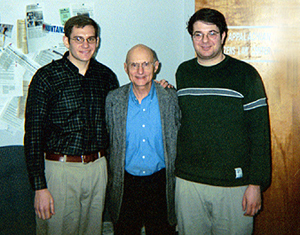 This spring break, I decided to participate in Duke Law’s Southern Justice Mission Trip. I had participated in a similar program as an undergraduate, and had really enjoyed it, so I was happy to have the opportunity to do it again. I came to law school to enable me to help people, and this seemed like a perfect opportunity to get away from the daily grind, and do just that.

I was placed with Appalred, a legal aid organization in Kentucky’s Appalachian Mountains. Within a half hour of arriving on Monday morning, I was immediately put to work on a child-custody case. The organization was brimming over with various legal tasks they needed done, and I got the sense that I was truly making an impact with my presence. Tuesday I worked on another child-custody case, and also drafted divorce papers in still another case. Drafting the divorce papers was great, as what I wrote was actually filed down at the courthouse. On Wednesday, the last day I was there, I researched consumer law issues.

The staff attorneys and personnel I met were all extremely inspiring, and dedicated to helping the community. Also, we were taken out to lunches and dinners while we were there, and even had the chance to meet John Rosenberg. He is a Duke Law graduate, founded the organization I was working with, and is somewhat of a legend around the Law School.

While in Kentucky, we stayed at a church site that often put up volunteers. At night, we usually sat around the living room bonding with two older men who were staying in the same house as us, and were in town doing volunteer work for a different organization. In the middle of our stay, they left, but then we found a group of college students in a nearby building, and we hung out with them the next two nights. They even fed us freshly baked cake. These nighttime talking sessions added much to my experience.

All in all, I enjoyed my time in Kentucky. The only drawback was that I did not have much client interaction, however, that was a function of the short amount of time I spent with the organization. This summer, I plan to build on my experience there, and work with organizations that will allow me to work with traditionally underserved citizens.

I had the privilege of spending three days during my spring break volunteering at the Appalachian Citizen’s Law Center in Prestonsburg, KY. I felt that this was an incredibly rewarding experience and my only regret is that I could not spend more time there.

Getting to Prestonsburg was an experience. The roads were surprisingly good (2 lane and pretty open most of the way) considering that they went through some of the more rugged terrain east of the Mississippi. Eastern Kentucky is a beautiful, mountainous region that bears the scars of American industrial growth. The aforementioned good roads often go where mountains once were. The dynamite-induced sharp sides of the mountains that remain reveal, among the strata, the coal veins that simultaneously brought wealth to the region and poverty to much of its population. There are mountains with bald tops from strip mines, and streams blocked with “fill” and oddly barren which have been “reclaimed” after the conclusion of mining operations. The houses that one passes en route largely range from lower-middle-class tenements that appear to be relying on external facade to hide their often cheap workmanship to run-down shacks evincing the squalor in which much of the region’s people live. There are nicer dwellings to be seen, but they are few and far between.

We stayed at Mt. Tabor, which is a piece of a mountain owned by the Sisters of St. Benedict. We lodged in a cottage on the top of their property, where we shared a house with a resident volunteer, Elmer, and, for two nights, two volunteers from Chicago, Tom and Don. Without TV, we had some really great discussions at night. The Sisters are active in performing volunteer work in the local community, and much of it, largely though Elmer, involves performing construction jobs for impoverished local residents.

The Appalachian Citizens’ Law Center is situated in a small, upstairs office, one block away from the Prestonsburg Courthouse. It’s quite amazing to think of what its three attorneys accomplish from such a humble place, and without the assistance of paralegals or secretaries. The work ranges from environmental law to black-lung benefits claims to United Mine Workers of American (UMWA) pension claims to everything in between. The attorneys were energetic and engaging and really seemed to care about their work. Though my time there was brief, I was able to research an issue from scratch and draft a memo of the basics in that area of the law, work on a UMWA pension claim pending in federal court, and trek out to a client’s property to meet him and survey the damage he claimed was caused by excess runoff from a strip-mine which removed the top of the mountain on which his property is situated.

The latter task was probably the most memorable. The client’s main concern was that excess runoff during rain storms is bringing debris on his property and causing the stream to erode at an accelerated pace. We met with the client and a representative and attorney from the mining company to assess the damage. This entailed crossing a stream by hopping from rock-to-rock and then climbing up the side of this mountain through the drainage creek. Unfortunately, I left my waterproof boots in Durham, and had to make the climb in my sneakers. Did I mention it was around 30 degrees outside? I couldn’t have asked for a more real experience.

Several jokes were made regarding “you gave up Cancun for this,” especially as I was hiking up that cold mountain stream. I’m really glad I did it and I’d recommend it to anyone. 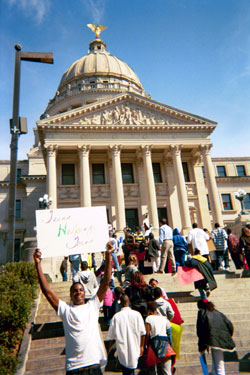 Three Duke Law students came to Mississippi for a week not knowing what to expect. What we found was a dedicated group of attorneys trying to secure the promise of justice for those most at risk. The three of us didn’t want to leave.

For most law students, Spring Break is a chance to flee dusty law books and escape to cold drinks on warm, sunny beaches. For us, the escape from the academic was in many ways more refreshing and more rewarding. Working for the Mississippi Center for Justice, we got to experience the real impact of laws, passed down from a legislature far removed from the people it affects. We got to witness the administration of these laws by hard-working courts that pushed juveniles through the system as a matter of course for a bureaucracy set up to process rather than help. Judges and lawyers simply doing their job, kids paying the price for a failing system. We got to see all these things.

Duke Law School, through its annual Southern Justice Mission Trip, provided the opportunity for us to come to Mississippi to help secure promises of justice to the state’s incarcerated juveniles and to see first-hand the issues they face going through the Youth Court and Training School process. This is the second year of the program, and student volunteers could choose from placements in Mississippi, working with coal miners in the Appalachians and doing death penalty work in Alabama. With continued support from the school and continued interest from public interest firms, like the Mississippi Center for Justice, the Southern Justice program cannot help but grow and provide valuable experience to law students and much needed help to participating organizations.

We were thrilled to have this opportunity, and would like to thank the Mississippi Center for Justice for putting us to work and making us feel welcome and a part of something. We quickly felt at home within the Center and the Congress Street community, and were heartened to feel that we may have done some good, in our small way, for the people of Mississippi. Thank you, and keep up the good fight.