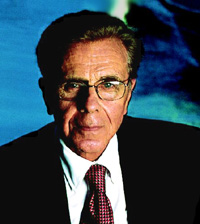 The Fifth Annual Conference of the Program in Public Law will celebrate the scholarship and professional contributions of constitutional law scholar William Van Alstyne. On April 16-17, 2004, the Public Law Program will bring together a group of scholars, lawyers and alumni to reflect on the contributions that he has made to the profession during a distinguished teaching career that began in 1961 at Ohio State University. Among those scheduled to participate are David Currie, Dan Farber, Garrett Epps '90, Jesse Choper, Walter Dellinger, Rod Smolla '78, Jim Chen and Susan Low Bloch.

Van Alstyne, who is the William R. and Thomas C. Perkins Professor of Law, joined the Duke faculty in 1965. He will be leaving Duke this summer to join his wife, Professor Lan Cao, on the faculty of the William & Mary School of Law. In explaining his decision, he wrote, “ As a place to live, to teach, to be known as being of its faculty, it has been an honor and joy to have been a part of this institution. ... The balance - of manageable size, of excellent teaching and research facilities, of program diversity and strengths (certainly including the LL.M. program which has added real international vitality over the years), and of students as able and conscientious as any I have seen in visiting elsewhere - is truly outstanding. The good will of its alumni, the friendship of its staff in every department, the memorable generations of former and of present students, and the consolations of colleagues I value very greatly ... I shall dearly miss them all."

“It is a monumental understatement to say that the Duke Law community will greatly miss Professor Van Alstyne,” Dean Katharine Bartlett wrote in a message to students, faculty and alumni announcing his departure. “He will always be a part of us, even as he is embraced by a new law school that I must assume fully appreciates his incredible talents and accomplishments.”

A look at his curriculum vitae will confirm that there is scarcely a major constitutional issue to which he has not made a substantial contribution. In addition to his scholarship on constitutional issues, he has provided public testimony as well as private advice to many congressional committees and members of the House and Senate, where his insights and judgments on many issues, including proposed constitutional amendments, legislation impinging on free speech, on the standards for impeachment, and on the scope of the president's war powers, have been widely influential.

Perhaps the field with which Van Alstyne is most closely identified is the First Amendment. His classes on the subject are always oversubscribed, despite the heavy workload required, and his First Amendment casebook is the leader in its field. He has written widely on the subject for law review publication and has been active in litigation on First Amendment issues, generously providing advice to attorneys involved in litigation involving free speech. In addition he has been a longstanding leader in Committee A of the American Association of University Professors, filing briefs and otherwise defending academic freedom throughout the country.

“The Public Law Program is delighted to bring a group of distinguished scholars, lawyers and alumni together to reflect on Bill's work,” Schroeder said. “We got the idea for this event at this time from the fact that 2003 marked the 200 th anniversary of Marbury v. Madison . Bill's A Critical Guide to Marbury v. Madison , written 35 years ago, has remained the gold standard analysis of the legal issues raised by the Marbury litigation — as well as the refuge of many years of law students confused about the case in their constitutional law classes.”

The Program in Public Law is generously underwritten by Marcy and Rick Horvitz '78. Marcy Horvitz died unexpectedly on November 17, 2003. The Conference honoring Professor Van Alstyne is dedicated to her memory and her tremendous generosity.

Further information about the conference may be found on the Public Law Program's website, http://law.duke.edu/publiclaw/ .