Practical Politics and the Law Series 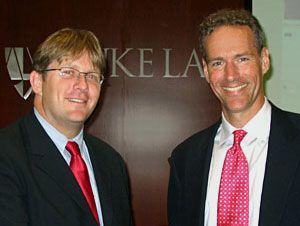 A new student-organized series offers Duke Law students insight into the workings of the political system from bi-partisan perspectives. “I wanted to find [speakers] who could demystify the political process and provide guidance to Duke students on becoming directly involved in state and national politics,” Ryan Bates ’06 said in introducing the “Practical Politics and the Law” series at its first event on October 5. The series is sponsored by the Program in Public Law.

The inaugural speaker, Paul Hackett, is a Cincinnati-area lawyer and Iraq war veteran who won the Democratic nomination to run for Congress in a primarily Republican Ohio district. Hackett described his distress at returning from combat duty in Iraq last March to find Congress “shut down” to deal with the Terry Schiavo case, as opposed to dealing with issues such as the economy and the war. When a friend approached him about running for the newly open seat in his district, Hackett, a political novice, said, “I was presented with this opportunity to sort of put up or shut up in trying to make a difference.”

Hackett explained the challenges involved in raising money for a campaign and in getting key Democratic strategists to support his race. His status as a war veteran attracted attention first from a CNN reporter and then the national media after he publicly called the President a “;” financial and strategic support then poured in, he said. Hackett won 48 percent of the vote, an unprecedented showing for a Democrat in his district. He now plans a Senate run.

Hackett stressed the importance for candidates to understand voters in their communities–he had grown up in his district–and made a direct plea to the students in his audience to get involved in politics.

The series continued on October 18 when former Democratic National Committee Chairman Joe Andrew shared his views on how technology is shaping the political process. With the emergence of technology that allows users to filter the information they receive to comport with their own world view, Andrew said that politics will follow suit; both political parties and commercial advertisers will increasingly use “the buildable, suggestive search function” to tailor messages to individual voters. He offered, by way of example, an individual who has identified him or herself as a “progressive” through a series of online choices.

“Once you have self-identified as a progressive, you will see a progressive world,” he said, adding that it will lessen the importance of party affiliation and effectively erase the line between commercial and political speech.

“I am predicting that all the committees–MoveOn.org, or the Democratic congressional and senatorial campaign committees–all those non-profits that currently do politics, will become adjuncts of for-profit companies. Your political views will become part of commercial marketing strategies.”

Andrew also made a direct plea to his student audience to lead in what he called this “new world order”–to make sure that important issues aren’t “lost in the technology and commercialization of politics.”