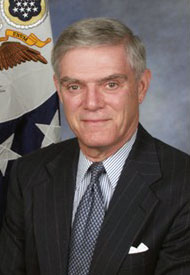 Delivering a keynote address during the Law School’s International Week on October 25, the former U.S. Ambassador to Rwanda, David Rawson, offered insight as to why diplomacy “failed miserably” to prevent genocide in that country in 1994, and how similar tragedies might be avoided in the future.

Having assumed his three-year posting in 1993, Rawson was an observer at the UN-sponsored talks in Arusha, Tanzania, that sought to broker peace between the provisional Hutu-led Rwandan government, and the insurgent, Tutsi, Rwandan Patriotic Front. Carnage erupted after President Juvenal Habyarinama’s plane was shot down over the Kigali airport on April 6, 1994; over 800,000 people, mostly Tutsis, were killed within a three-month period, primarily at the hands of Hutus.

The international community was employing “standard diplomatic tools”–among them the withholding of economic aid, moral condemnations, human rights fact-finding missions, and commissions of inquiry–long after the extent of the butchery in Rwanda was known. Their failure, said Rawson, pointed out the essential problem with diplomacy: It puts state sovereignty ahead of human suffering.

“Our dominating diplomatic ethos is about negotiation, fair play, and power sharing. In the middle of genocide, that doesn’t work. Sometimes we need political will, [which] comes from two places–one is the people and the other is the president. And that’s what we didn’t have in the case of Rwanda.” Rawson lamented the fact that after his evacuation from Rwanda in the first week of violence, he was never able to personally brief President Clinton on what was going on. “What we really needed [was for] the president to take the leadership on this, and the rest of the bureaucracy would have followed.”

To prevent similar tragedies, Rawson suggested the development of an international “tripwire mechanism,” that would be triggered by something short of genocide, which eludes clear definition, but involves killing on a very large scale.

“If atrocities are being committed by a state against its own people in a significant way, then we ought to begin to organize ourselves internationally, and very quickly. The thing is to have those communications already established.” He was quick to say that he was not necessarily talking about having American troops on the ground, but advocated having Americans push vigorously in the UN for some kind of UN or regional force “that will stop people from doing dastardly things to other people.” With at least 256 groups estimated to be at risk right now, he noted that the U.S. and the UN can’t do it all. “In situations like these we, the international community, we, the states of the world, and we, the people of the world, do have a responsibility to protect.”