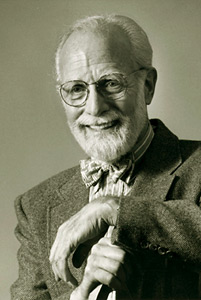 Professor Emeritus Melvin Shimm died at his home on Saturday, September 17, 2005, in the company of his family. While most current students will not have had the opportunity to have known Professor Shimm, this is a great loss for our collective community. Professor Shimm joined the Duke faculty in 1953, serving as Associate Dean from 1978 to 1983, and he assumed emeritus status in 1996. Professor Shimm was the founding faculty adviser of the Duke Law Journal, and long-time editor of Law & Contemporary Problems. Below is the text of the obituary from the Durham Herald-Sun.

Mel Shimm has been a wonderful member of our community, and he will be greatly missed.

The memorial service for Professor Shimm will be held on Sunday, October 23 at 1:00 pm at the Beth-El Synagogue which is located at 1004 Watts Street at the corner of Watts and Markham, just off Duke's East Campus.

DURHAM - Melvin G. Shimm, Professor Emeritus of Law at Duke University Law School, died peacefully at home in Durham, on September 17, 2005, after a long struggle with prostate cancer, at the age of 79.

Professor Shimm was born in New York City on January 30, 1926, to Joseph and Sadie Shimm. His college education was interrupted by World War II, in which he served for three years. After he was honorably discharged from the Army as a second lieutenant in the field artillery, in 1946 he resumed his college education where he was elected to Phi Beta Kappa and graduated with honors from Columbia University in 1947. He graduated with honors from Yale Law School in 1950, where he was an editor of the Yale Law Journal and was elected to the Order of the Coif honorary society.

Professor Shimm has had a long multi-faceted career in law, law teaching, and civic affairs. In 1950, he practiced law in New York City, and he worked as an attorney for the Wage Stabilization Board in Washington, D.C. during the Korean War. Following a year as a Bigelow Fellow at the University of Chicago Law School, he began a long and fruitful career on the faculty of Duke Law School where he taught from 1953 until he retired in 1996. He has also taught at New York University and the Universities of Southern California, North Carolina, Michigan and Texas.

In addition to teaching, he served as editor-in-chief of Law and Contemporary Problems and of the Journal of Legal Education, both at Duke Law School, as American editor of the Journal of Business Law and the Business Law Review, as faculty editor of the Duke Law Journal, and as the director of the Association of American Law Schools Orientation Program in American Law 1968-70, and of the Duke Summer Institute in Transnational Law 1986-92.

Along with a loving family, his legacy includes many honorable and honored Duke Law School Alumni and colleagues from his 43 years teaching. There will be a graveside service in Westchester County, N.Y., and a memorial service in Durham will take place at a later date.