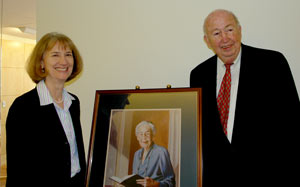 Dean Katharine Bartlett, faculty, and staff gathered November 15 to celebrate Robinson Everett’s generosity in creating and supporting Duke’s Center on Law, Ethics and National Security. Judge Everett presented Dean Bartlett with the third $1 million installment of his family’s endowment pledge which, over the past 13 years, has anchored the Law School’s excellence in national security law.

“When Robbie Everett founded LENS in 1993, we didn’t know what a significant contribution this would be to the intellectual life and reputation of this Law School,” Bartlett said, praising the foresight shown by Everett, a former Chief Judge of the Court of Military Appeals, and his mother, the late Kathrine Everett, in choosing to support research and programming in national security issues long before 9-11 brought them into mainstream focus.

Both Bartlett and Everett praised the expertise that Professor Scott Silliman, LENS’ executive director, has brought to the stewardship of the center and to his active involvement in informing the public debate regarding national security issues through teaching, commentary, and conferences.