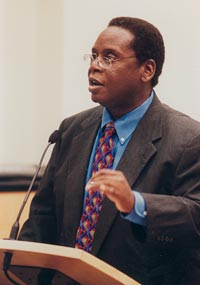 Duke Law School will pay tribute to the late Professor Jerome Culp, Jr., Monday, February 13, with a panel discussion on "Reflections on Racial Justice." The program will begin at 4 p.m. in room 3041, and will include the unveiling of a portrait of Professor Culp that will hang permanently in the Law School.

Professor Culp was a member of the Duke Law faculty from 1985 until his death on February 5, 2004. He was a prolific scholar, internationally known for his work on race and the law. He was the author of numerous books and articles on the subjects of critical race theory, justice and equality, law and economics, and labor economics. He also taught in the fields of torts, employment discrimination, and sexuality and the law. Professor Culp was known for being a dedicated teacher, mentor, and friend to students, and an avid fan of Duke Basketball.