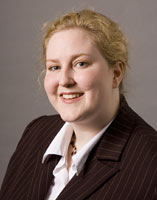 The Duke Law School community is mourning the loss of Maja Kolb, 29, an LL.M. candidate from Berlin, Germany. She died on October 29 after a brief illness.

“Maja was an active, enthusiastic member of this community,” Dean Katharine T. Bartlett said. “Her tragic loss will be felt by all her friends and professors.”

Ms. Kolb received her law degree from the Free University of Berlin in 2001. Having completed her mandatory postgraduate judicial service, Ms. Kolb also worked in a private firm and trained with an insolvency receiver in order to further her interest in corporate and commercial law.  She had also worked on her German legal doctoral thesis, a comparative study of minors’ capacity to contract under German, English, and French law.

Fluent in German, English, and Spanish, and proficient in French, Ms. Kolb enthusiastically pursued international exchanges. She spent a year as a high school exchange student in Clark County, Virginia. While at Free University, she studied law for two trimesters at Universidad Autonoma in Madrid, Spain, as the recipient of the European Union’s Socrates Scholarship, and spent a summer externship with the Los Angeles County District Attorney’s office.

“Maja demonstrated a strong interest in the legal profession and was an enthusiastic student,” said Judy Horowitz, associate dean for International Studies. “More important, she was a devoted friend and will be greatly missed by those who cherished her friendship.”

A memorial event was held Wednesday, November 1, at the Law School.