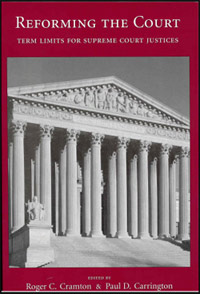 Should Chief Justice John Roberts follow in the footsteps of his predecessors — “continuing in office until he dies or becomes physically or mentally incapacitated” — he could occupy his seat on the Court for more than three decades — a possibility Professors Paul Carrington of Duke Law School and Roger Cramton of Cornell Law School argue is worthy of serious attention.

The essays explore what consequences might result from the lengthening tenure of justices, whether these consequences mandate reform, and whether congressional enactments or constitutional amendment is necessary to remedy the issue.

“The Supreme Court has become a super legislature in American government, making many important political decisions that are all but immune to change by others,” says Carrington. “Its powers are greater by far than any the Founders envisioned.” This book considers “what can be done to restore the Court to a role reasonably consistent with democratic self-government.”