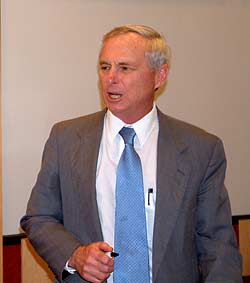 Robert F. Nagel, Ira C. Rothgerber Jr. Professor of Constitutional Law at the University of Colorado and a pioneering scholar in constitutional law and theory, spoke to Duke Law students on Nov. 13 as the School's 2003 Brainerd Currie Memorial Lecturer.

Nagel entered into his speech, entitled "Diversity and the Practice of Interest Assessment," reluctantly, he said. "This reluctance is based in part on my long-held view that everything that can be said about affirmative action has been said ... Moreover, I am intimidated by the distance between the opposing positions on the issue."

But, Nagel said, a better understanding of "interest assessment" — the weighing by the United States Supreme Court of state interests against the US Constitution - can be garnered by exploring the Court's recent opinion in Grutter v. Bollinger , which held that the government has a compelling interest in diversity. In so finding, the Court declared that governmental preferences at odds with the Fourteenth Amendment are justified by educators' opinions that diversity is important.

"Those of us who have been reluctant ought to face up to the issue more than we have," Nagel said.

In Grutter , Justice O'Conner wrote that "numerous studies show that student body diversity promotes learning outcomes, and "better prepares students for an increasingly diverse workforce and society, and prepares them as professionals."

Looking at diversity this way is attractive, Nagel said, but in reality he said "it would seem odd to say that a critical mass of one percent Native Americans in a class reflects the number necessary to vitalize class discussions and break down discredited stereotypes while a critical mass of nine percent of African Americans is necessary to achieve the same result."

Nagel went on to say justifying racial preferences to correct history has been ruled illegal, so schools have had to "conceal their true objectives" in their reasoning.

He also pointed out that diversity proponents have always wanted to correct racial imbalances, but never seem concerned about other kinds of groups. "If advocates of racial diversity have ever pushed for admission of a critical mass of pro-life students or of religious fundamentalists, I, like many other observers, must have been absent that day."

Nagel did not advocate eliminating diversity programs. In fact, he cited John Stuart Mill, who argued that unwelcome opinions should be heard because they may help make the truth clearer, as one example of a program that is good no matter what happens.

Nagel led the audience to his next question, "If we grant that diversity in higher education is a compelling governmental interest, is there any basis for denying that status to the moral objectives that animate prohibitions against homosexual conduct (referring to the Court's recent running in Lawrence v. Texas )?"

How much such private domain issues affect the public arena is often the criteria the Court uses in interest assessment. Nagel pointed out that the Lawrence case suggests that "legalizing homosexual sodomy will not lead to any destructive consequences for family life," Nagel said. Homosexuality may change the community culture, Nagel said, but it does not necessarily mean marriage needs to be protected.

Great social purposes, Nagel said, cannot be ranked by judges. These ideals are cultural and change with time. Courts must take avenues other than interest assessment into consideration when defining law, but it is possible that some laws are delineated by current social views. "The courts are not deferring to extraneous judgments about social utility and moral aspiration. They are making room for an aspect of constitutional self-definition that is inherently political and cultural," Nagel concluded.

Robert Nagel is the author of four books and over 50 law review articles and has contributed to the popular debate on such critical constitutional issues as free speech, hate codes and federalism in publications such as The New Republic , the Wall Street Journal and the Washington Monthly . Much of his work has focused on the judiciary and its interpretation of the Constitution in the wider context of American political culture, including his two earlier books, Constitutional Cultures: The Mentality and Consequences of Judicial Review (Cal. 1989) and Judicial Power and American Character: Censoring Ourselves in an Anxious Age (Oxford 1994). He is a fellow of the American Academy of Arts & Sciences and was formerly the Director of the Byron R. White Center for the Study of American Constitutional Law.

The Brainerd Currie Memorial Lecture is a lecture series that began over 25 years ago to honor Professor Brainerd Currie, a noted scholar who was best known for his introduction of the concept of governmental interest analysis to the field of conflict of laws. Recent lecturers in this series include Sanford Levinson, Robert Post, Robert Litan, Martha Minow, Bob Ellickson, Sir Kenneth Keith, Franklin Zimring, Jon Elster, Ernest Weinrib, Margaret Jane Radin and Janet Halley. The purpose of the series is for a noted scholar to provide a distinguished public lecture, along with a substantial manuscript for publication in the Duke Law Journal.