Almost 70 faculty members, students, researchers, government officials, and members of the biotech community visited the Law School on Sept. 27 and 28 for a day-and-a-half symposium on the "Commercialization of Human Genomics: Consequences for Science and Humanity." Sponsored by Duke's Center for Genome Ethics, Law and Policy, the symposium presented 13 nationally-renowned speakers from industry, academia, consumer advocacy and the legal field to explore the growing commercialization of the human genome, the ethical and social ramifications of such commercialization and possible policy options. 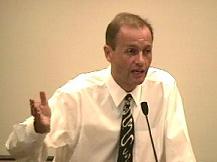 Friday morning began with a panel on the "Political Philosophy and Economy of Intellectual Property," led by Duke professors Alex Rosenberg (Philosophy) and James Boyle (Law), and local biotech CEO, Max Wallace. This panel set the stage for the rest of the symposium by exploring the underlying philosophical basis for intellectual property, including property in the intellectual achievements of the genomic revolution.

Panel Two continued to examine the nature of intellectual property (IP), but sharpened the focus to the world of genomics, and, in particular, the world of biotech companies. All three panelists acknowledged the importance of patents in the biotech world, but they strongly divided over how broad those patent rights should be. They also disagreed over whether DNA should be patented at all. Lila Feisee, from the Biotechnology Industry Group, argued that strong IP rights promote innovation in the area of biotechnology, while Barbara Caulfield, General Counsel for Affymetrix, a "gene chip" manufacturer, argued that the patenting of DNA allows private control over fundamental scientific discoveries, and result in the stifling of further research.

Panel Three began with the recognition that some gene patents are valuable, while others can hinder innovation, and panelists discussed what could be done to ensure that the law promotes the positive aspects of intellectual property rights while diminishing drawbacks. Dr. Robert Cook-Deegan, director of Duke's Center for Genome Ethics, Law and Policy, described his empirical research on DNA patenting, with graphs showing that the vast majority of DNA patents are owned by the United States. He raised the question of how this will appear to other countries as they enter the world of genomic research. 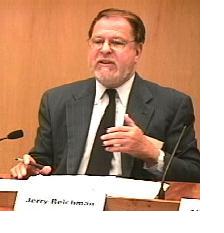 The Symposium ended with a lively debate over access to scientific data, "open science" efforts, free online journals, and regulatory reform. These topics are of particular concern to genomic science since large amounts of genetic information are being collected in private databases, and the scientific norm of free exchange of data clashes with the desire for secrecy in private industry. Duke Law Professor Jerome Reichman warned of the move afoot to create a new intellectual property right over the raw facts contained in databases, a proposal that goes well beyond the current protections of copyright and patent law. Since science depends on access to factual data, this has aroused great concern in the scientific community. Professor Allen Buchanan (Duke philosophy and public policy) tied together many of the concerns raised over genomic data, privacy and confidentiality in his descriptions of the new field of "pharmacogenetics" - where drugs are prescribed according to a person's genetic makeup - and how this use of genomics in clinical medicine is fraught with dangers but also with wonderful possibilities.