Clint Bolick, founder of the Institute for Justice, a libertarian public interest law firm based in Washington, D.C., tried to convince students in a March 5 debate at Duke Law School that allowing families to use vouchers — public money to pay for private schools, including schools affiliated with religions — would lead to vastly improved education for the children affected and spur improvements at failing public schools.

But his debating opponent, Duke Law Professor Laura Underkuffler, herself an expert in the area of school choice, took the stance that allowing public money to fund religious schools would undermine generations of court-enforced separation of church and state and ultimately might curtail long-cherished religious freedoms.

For the past 12 years, Bolick has led the nationwide effort to defend school voucher programs, with victories in the Wisconsin, Ohio, and Arizona Supreme Courts and culminating in Zelman v. Simmons-Harris in the U.S. Supreme Court last year. He noted that many of the communities to adopt voucher programs had little to lose. In Milwaukee, for example, only about 15 percent of children from poor families were graduating from high school on time in the late 1980s and early 1990s.

For many children in that school system, public education “was a recipe…for perpetual poverty and despair,” he said.

Despite legal challenges, a program eventually was created for 1,000 children whose families could use some public money to attend private schools. As a result, he said, their graduation rates and general school performance improved. The public school system implemented a variety of its own improvements as a result of the voucher program and the competition it spurred, he added, such as closing failing schools, giving principals more authority to make changes and increasing tutoring for children with greater needs. 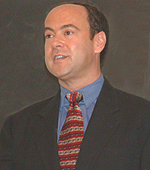 Bolick also said the U.S. Constitution’s First Amendment Establishment Clause says nothing about public funding of religious schools and that the experiences of most communities that allow vouchers to pay for children to attend such schools have been positive. There simply aren’t enough seats available in high-performing public schools in many districts across the country to accommodate all children, he added.

Underkuffler, who once taught in a Catholic elementary school in a poor neighborhood of Chicago, agreed that school choice is important to educational improvement and that religion holds an important place in public life. However, she sharply differed with Bolick on the issue of vouchers for religiously oriented schools. In her view, citizens should not be forced to fund religions or religious institutions whose teachings they oppose.

Just such problems are arising in Europe, which has a longer history with state funding for religious schools than does the United States. Faced with increasing religious diversity, she said, communities have found themselves confronted with demands for taxpayer funding of schools whose teachings they find divisive or disturbing. With vouchers, she said, children in this country could be sent to schools that teach racial supremacy, hatred of some religions, or gender inequality — all on the public dime.

“In the U.S. we are hurtling down this road,” she said. “In the UK and Europe, they are desperately trying to find a way to back out of funding for religious schools.”

Underkuffler also said that proponents of vouchers for religious schools argue that religious institutions should be treated equally with any other non-profit organizations. That, she said, is a huge mistake that could detract from the protections that religious organizations and individuals now enjoy from government, such as freedom from taxation and religious exemptions from many laws. “How can religion be the same, and yet entitled to special protection from the Constitution?” she asked. “Religious institutions and individuals must consider what they will lose if we march down this path.”

Bolick, whose firm continues to push for voucher programs across the country, countered that college students are able to use government grants to attend religious colleges and that situation has not led to widespread community discontent or an undermining of religion. “Here we’re simply saying that all students are entitled to this and that where they choose to use the money is their own business.”

Underkuffler noted that elementary and secondary schools are very different from colleges because the state mandates attendance there — not so with colleges and universities.

The event was sponsored by the Duke Law Federalist Society.