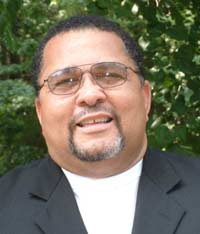 Duke Law Alumnus Amos Mills '72 and Law Professor Trina Jones will launch a four-part conversation series for the fall and spring designed to engage scholars, students, activists and others in discussion of one of the nation's most important yet thorniest issues: race. The Jean E. and Christine P. Mills Conversation Series is supported by a gift from Mills, who practices law in Fuquay-Varina, NC, following a 27-year career with the FBI.

The inaugural conversation will take place on November 4, from 6:30 until 8:30 p.m., at Duke Law School in the Blue Lounge. The featured guest is William J. Raspberry, Pulitzer Prize-winning journalist and Knight Professor of Communications and Journalism at Duke's Sanford Institute. Raspberry, also a columnist for the Washington Post, frequently examines issues of race in his commentary.

The overall theme for the conversation series is Talking Race. The specific topic for November is "Should We Still Be Talking About Race?" Raspberry will open with a 15-20 minute analysis of this question. Jones notes however, "Our goal is not to have a routine Q & A session following Mr. Raspberry's comments, but rather to use his observations as a springboard to initiate a dialogue, indeed, a conversation."

Mills, who named the series for his late mother and sister, said Americans desperately need to talk about race and to overcome barriers of fear and mistrust. He hopes the conversations will contribute to improving relationships among people of different skin colors and backgrounds.

The series is meant for people of all races and backgrounds, said Jones. "We want this to be all inclusive. Everyone has a race and a viewpoint, and we want everyone to feel welcome."

In addition to the November 4 conversation, three additional conversations are planned on the following topics: (1) Unraveling Race and Socio-Economic Class: The Illusion of Black Wealth and the Conflation Syndrome; (2) Race and Public Education: Still Separate and Still Not Equal. Where Do We Go From Here; and (3) Spinning Race: White Myths Versus Black Reality. All conversations are free and open to the public.

For more information about the series or to help support the effort please contact Jones at tjones@law.duke.edu.