The inaugural Jean E. and Christine P. Mills Conversation Series, Talking Race brought a racially diverse crowd from the Triangle community to Duke Law School Nov. 4. The conversation, opened by Duke University professor and noted journalist William Raspberry, centered on whether race should still be discussed and involved a spirited dialogue among attendees. 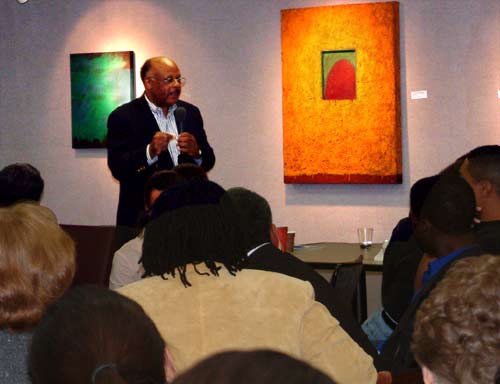 The first installment of this four-part conversation series, designed by Duke Law alumnus Amos Mills '72 and law professor Trina Jones, did what it was intended to, engage scholars, students, activists and others in discussion of one of the nation's most important yet complex issues: race.

Raspberry began the discussion by asking attendees to consider the relevancy of race and racism in American today and the myriad of ways people of color might to respond. Raspberry acknowledged the continuing presence of racism, but said he was puzzled by the degree to which people are unwilling to acknowledge racial progress. Raspberry is struck by the racial pessimism he reads in his students' papers. “These are bright, thoughtful kids who don't believe it (racial progress) is going to work out well. Its not just on the campus or in my class that I find this.”

Where does this pessimism come from? Raspberry said individually there is optimism, but the group perspective is more pessimistic about racial progress. Raspberry noted that pessimism is not necessarily a bad thing, but can be used as a motivator to solve our racial problem. But, Raspberry added, “when you believe in your gut that racism is an impossible barrier, then it would be stupid to try (to eradiate it).”

Racism will always be present Raspberry said. He suggested that instead of focusing on a problem that is not going to change, people of color might be better served by devising responses that will get around it. In his words, “Racism is the ocean we find ourselves in. It's up to us whether we gurgle and drown, or swim. We need to swim as best we can.”

Raspberry best summed up the group's thoughts. “There is racism, it permeates American. It would be great if it would go away by the end of the year. What do you tell your children in the meantime? Wait? Or attempt to achieve what's achievable.”

As Raspberry's introduction segued into a conversation among attendees, students in the audience pointed to the large statistical disparities between whites and people of color and said a few successful and privileged people of color do not negate the statistics. They said this difference indicates there is still reason for concern and causes pessimism.

In the midst of an exchange about whether we should be pessimistic or optimistic, Durham city councilman Howard Clement announced that he is a “realist.” He said, “Racism is rampant today and the only way to deal with it is to talk about it.” He pointed to unemployment, housing situations and his own daughter's interaction with the “N” word as examples of racism's prevalence.

Professor Jones asked, “How do we know racism is the problem that causes all of these outcomes?” Marilyn Yarborough, law professor at the University of North Carolina, responded that people of color just know it, based upon a lifetime of interactions in a culture where racism is rampant.

The conversation took many turns throughout its duration and most attendees voiced opinions, presented ideas and asked what could be done. As the discussion came to a close, most were not ready for it to end, wanting to further explore the subject and find answers to their many questions. The conversation series will continue in Spring 2004.

About the Jean E. and Christine P. Mills Conversation Series

The Jean E. and Christine P. Mills Conversation series is meant for people of all races and backgrounds to come together to discuss race. The series is meant to be interactive and inclusive of different viewpoints.

Amos Mills, who named the series for his late mother and sister, said Americans desperately need to talk about race and to overcome barriers of fear and mistrust. He hopes the conversations will contribute to improving relationships among people of different races and backgrounds.

In addition to the November 4 conversation, three additional conversations are planned on the following topics:

All conversations are free and open to the public.