Tom Durkin and Ed MacMahon, seasoned trial lawyers, will speak about the military commissions at Guantanamo Bay, describe how they differ from Federal Court proceedings and examine the issues raised when dealing with classified evidence in such proceedings.

Edward MacMahon has been practicing criminal law since 1986, and has represented numerous clients charged with offenses related to national security as well as clients facing the death penalty. Mr. MacMahon represented Zacarias Moussaoui, who was charged with crimes related to the attacks of September 11, 2001. Although the government sought the death penalty in that case, a jury ultimately elected to spare his life. According to the government, the Moussaoui case involved the largest quantity of classified evidence ever produced in a criminal case requiring dozens of hearings to address the use and admissibility of that evidence. 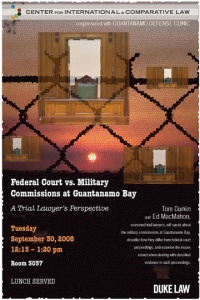