Film Screening and Discussion: The Destruction of Memory 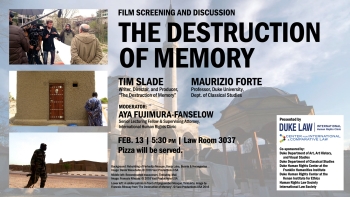 The Destruction of Memory—The War Against Culture, and the Battle to Save It: “Over the past century, cultural destruction has wrought catastrophic results across the globe. This war against culture is not over—it’s been steadily increasing. Based on the book of the same name by Robert Bevan, The Destruction of Memory tells the whole story, revealing the decisions of the past that allowed the issue to remain hidden in the shadows for so many years.”

Following the film screening, director Tim Slade will share updates since the release of the film, including legislation and court decisions. Additionally, based on his expertise in the fields of anthropology and archaeology, Professor Maurizio Forte will discuss the link between historical examples of cultural destruction and contemporary issues, both in the United States and internationally. The discussion will be moderated by Professor Aya Fujimura-Fanselow, Supervising Attorney, Duke Law's International Human Rights Clinic.

The event is free and open to all, no registration is required. Pizza will be provided at the event. For more information, please contact Balfour Smith (bsmith@law.duke.edu).

Tim Slade is a writer, director, and producer whose films have screened internationally. He has directed documentaries such as ‘4’, which was released theatrically and won a Gold HUGO, also receiving nominations at Banff, an International Documentary Association Award and two AFI (Australian Film Institute) awards, as well as television documentaries. He has also directed drama, including the shorts Every Other Weekend and I Was Robert Mitchum. His films have screened at more than 70 international film festivals.

Maurizio Forte, PhD, is William and Sue Gross Professor of Classical Studies Art, Art History, and Visual Studies, Bass Chair and distinguished professor at Duke University. He is also the founder and Director of the DIG@Lab (for a digital knowledge of the past) at Duke. Since 2018 he has been co-Director of CORSAC, Centre for Research and Studies on Ancient Cities, in Italy (a Duke-UNITUS initiative). His main research topics are: digital archaeology, classical archaeology and neuro-archaeology.

He received his bachelor’s degree in Ancient History (archaeology), and a Diploma of specialization in Archaeology, from the University of Bologna, and his PhD in Archaeology from the University of Rome “La Sapienza.” He has coordinated archaeological fieldwork and research projects in Italy as well as Ethiopia, Egypt, Syria, Kazakhstan, Peru, China, Oman, India, Honduras, Turkey, USA and Mexico. Since 2010 he has been director of the 3D-Digging project at Çatalhöyük.

He is editor and author of several books including Virtual Archaeology (1996), Virtual Reality in Archaeology (2000), From Space to Place (2006), La Villa di Livia. Un percorso di ricerca di archeologia virtual (2008), Cyberarchaeology (2012) and he has written more than 200 scientific papers. He has received several international awards such as the Best Paper award at VSMM 2002, 2010; E-content Award 2005, 2008; Tartessos Prize on Virtual Archaeology (2010).