1. Where are you from?
I'm originally from Madison, Wisconsin. Madison itself isn't particularly famous, but Wisconsin is famous for cheese and cow-tipping. I definitely enjoy at least one of those.

I went to college at Wesleyan University in Connecticut ... as much as I would have enjoyed it, no, it's not that all-girls school near Boston (it was, however, the model for "PCU," not without some justification). From there, I moved to Brooklyn for a few years before starting at Duke.

2. What brought you to law school and what do you want to do with your degree?
I came to law school because my career as an atonal off-broadway singer didn't take off quite as well as I had hoped. Actually, my dad is a lawyer who likes his job, so law school was always more "when" than "if." After a few years of barely making ends meet in New York City, the time seemed about right.

It's cruel to ask a 2L in the middle of interview season what they want to do with their law degree, I just want a job! I'm interviewing with firms and federal government employers in Washington, D.C., and would like to have a career that involves public-sector work at some point, whether it happens right after law school or not.

As for what I plan to do with the degree itself, I have grand plans to frame it and hang it in my office, eventually. But I'm a pretty major procrastinator, so it'll probably sit in an envelope in my to-do pile for awhile before that happens.

3. When you are not at the Law School, how do you like to spend your time?
Outside the law school, I'm the definition of a homebody. I spend most of my time with my wife, Kate, and our dog, Junebug. When we do get out of the house, the three of us spend a lot of time at the dog park and walking the trail around the WaDuke.

Most weekends we'll head to Foster's at least once, and we try and remember to go to the Durham Farmer's Market if we wake up early enough on Saturday. Also, on any given night there's a better-than-even chance we'll swing by our friend Amber's house for a glass (or so) of wine and a play-date with her two dogs.

4. What are three television shows you can’t miss?

5. Tell us something about yourself that otherwise we wouldn’t know or guess.
My name was "Alphonsus" for the first seven weeks of my life. I was adopted through a Catholic adoption agency that had a policy of naming all it's newborns after the saint's day on which they were born. I'm glad my parents preferred "Michael." 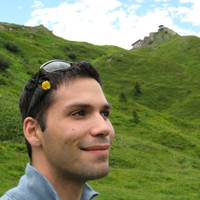