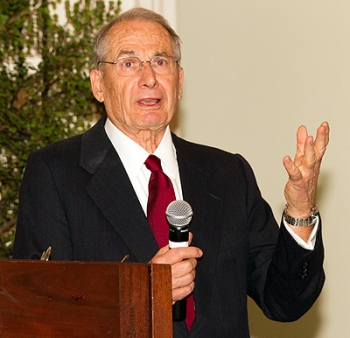 “George was the bounciest person we had ever seen,” Blue told 140 faculty, staff, alumni, and friends who gathered at the Washington Duke Inn to honor Christie on Nov. 3. “He had a rhythm. Once he started making a point, it was like he was reverberating on the blackboard.” The professor’s vibrations seemed to intensify as he focused a question on a student, said Blue.

Blue went on to take Jurisprudence in his 3L year from Christie, the James B. Duke Professor Emeritus of Law. The two men have maintained a close friendship over the ensuing four decades.

“He was fun and he made studying torts an exciting and uniquely rewarding experience,” said Blue, a member of the North Carolina Senate and former chair of the Duke University Board of Trustees. “He was also friendly, which was what made him so special to many of us. He would seek us out.”

Christie, who joined the faculty of the Law School in 1967, retired from teaching on Aug. 31. A group of his former students and friends have endowed a $100,000 scholarship in his honor, Dean David F. Levi announced at the November dinner, which also featured a performance by Greek dancers.

“George has taught thousands of Duke Law students over his 46 years,” Levi said.  “And the relationships that he has formed with many of these students have deeply affected both students and professor.”

Levi relayed anecdotes sent in by alumni of several generations, including Mike Villeggiante ’12, who recalled how he and his friends had won a bottle of port that Christie had donated to the PILF auction.

“We approached him after class to suggest that he join us for a small gathering to drink the port,” Villeggiante wrote in an e-mail. “He responded with something like ‘Well, what kind of Greek would I be if I made you pay to drink with me?’ and invited the whole class to his home for dinner and port with him and his wife.”

Following Levi, Blue, and others at the podium, N.C. Sen. Floyd B. McKissick. Jr. ‘83, spoke of Christie’s kindness during McKissick’s hospitalization after a shooting, a few years after his Duke graduation.

“He didn’t just come there on one occasion, he came there on a number of occasions,” McKissick said. “I think it’s that character that made him a most amazing professor.”

In an interview later, Christie credited his close ties to students to the Law School’s small size during his early years at Duke.

“I taught during a period when the faculty was a lot smaller and the curriculum was more limited,” he said. “As a result, there were long periods where I must have taught more than half of the graduating class. I try to keep in contact with many of them over the course of their careers. That has given me pleasure.”

He has also been gratified, he said, to have witnessed Duke Law’s transformation from a regional school into one of national and international renown.

Christie came to Duke after serving in Washington as assistant general counsel for the Near East and South Asia of the U.S. Agency for International Development.   Before that, he taught at the University of Minnesota, and had been a Ford Fellow at Harvard Law School and a Fulbright Scholar studying at Cambridge. 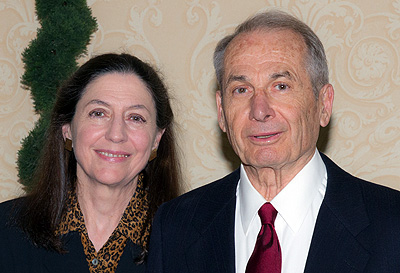 He admits that he never planned a long stay at Duke; he hoped to draw on connections to Hubert Humphrey from his time at the University of Minnesota to go back into government. But those hopes were dashed when Humphrey lost the presidential election to Richard M. Nixon ‘37. A law school classmate suggested him for a position in the administration, but Christie answered the question of his political affiliation truthfully – Democrat – “and that put the quits on that,” he said.

At Duke, Christie went on to influence the direction of both the Law School and the University. In 1972, he chaired a university-wide committee report that called on administrators to consult the Academic Council on all matters affecting academic affairs before they are implemented or submitted to the Board of Trustees for approval. The provision in the report, which codified that the faculty’s voice would be heard in university governance, is still called  “the Christie Rule.”

“In troubled times, George Christie produced the Magna Carta of Duke, and the university has been stronger for it ever since,” Duke President Richard H. Brodhead said in a statement read at Christie’s retirement dinner.

At his retirement dinner, several of Christie’s colleagues noted his many contributions to the Law School in their remarks, and he was given two gifts on behalf of the faculty. Neil Vidmar, the Russell M. Robinson II Professor of Law, presented Christie, an oenophile, with two bottles of French wine. Assistant Dean for Library Services Melanie Dunshee presented him with a first edition of Henry Sumner Maine’s 1861 book, Ancient Law, Its Connection With the Early History of Society, and Its Relation to Modern Ideas. The rare book, which Christie has donated to the library, will become part of the Christie Collection, which consists of treatises on jurisprudence and legal philosophy and is intended to promote the scholarly study of legal philosophy. Professor James D. Cox, the Brainerd Currie Professor of Law, chaired the committee that selected the gifts.

Christie said he was surprised and touched by the gifts and tributes, in particular by the scholarship established in his name. “In my own education I was really a scholarship boy,” he said. “My dad died when I was 15 years old and he was never particularly well off anyway. So I’ve gotten a world-class education owing to the generosity of others.”

In spite of his retirement from teaching, Christie will continue to do research and write. He is working on a forthcoming book on the limits of the adjudicatory process.

“I have a big research agenda, and I’m keeping my office, and I come in every day, so in a sense my life on a daily basis is not changing very much,” he said. “My life will continue to be centered around the university.”