Gao ’86 to 2014 graduates: Preserve optimism and idealism, lead by example 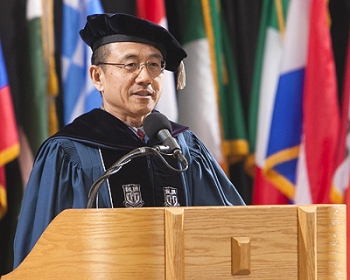 Xiqing Gao’86 encouraged Duke Law School’s 2014 graduates to preserve their optimism, idealism, and passion for their work when he spoke at their hooding ceremony on May 10.

“You have earned this seat through intelligence, diligence, and discipline,” said Gao, the former president and chief investment officer of China’s sovereign-wealth fund, the China Investment Corporation, and a Duke University trustee. “You have proven that you have a lot to offer this world. Now you need to prove that you can make a difference, whether that be in the courtroom, classroom, NGO, or office. Lead by example, because anything is possible.”

Gao addressed Duke Law School’s JD, LLM, and Master of Judicial Studies graduates prior to their hooding in Cameron Indoor Stadium.  Two hundred and twelve graduates received the JD degree during Duke’s weekend ceremonies, with 22 also earning an LLM degree in international and comparative law, and 13 also receiving a master’s degree from another graduate school at Duke University. One student also earned a Master of Global Business Law degree from Sciences Po in Paris, one of Duke Law’s partner institutions.

Fourteen distinguished judges from state and federal courts and two foreign jurisdictions earned the Master’s of Judicial Studies after completing two summers of intensive study at Duke Law and writing scholarly theses, all while maintaining their judicial duties.

One student, Feroz Ali Khader, was honored, in absentia, for his graduation with the SJD, the highest degree awarded in law.  Khader, the Ministry of Human Resource Development Intellectual Property Rights Chair at the Indian Institute of Technology in Madras, India, completed and defended a dissertation titled “The Access Regime: How Reoorganization of Local Patent Laws Can Promote Global Access to Affordable Medicines.”

In his remarks, Gao shared some of his life experiences in the hope, he said, of encouraging the graduates to transcend barriers regardless of cost. He recalled shouldering a heavy workload as a teenaged railroad construction worker in the mountains of Western China. The “lack of knowledge and information” made harsh conditions seem almost unbearable, he said.

“I devoured every piece of paper that had any word on it like a hungry man,” he said. “Together with a few co-workers we started a study group called ‘The Communist Laborer’s Night School,’ with a few old textbooks we brought with us.” They learned English – and risked imprisonment – by listening to Voice of America and BBC broadcasts on an old radio.

When he was assigned, after three years of hard labor and a head injury, to an artillery factory to make machine guns, Gao studied English on the side, eventually being among 12 out of 200 students to complete a year-long course.  That gained him a recommendation to attend college in Beijing, “without having ever been to a high school,” he said.

After graduating from both college and law school in Beijing, Gao was sent, in 1982, to a California law firm as an exchange scholar as preparation for a teaching career in China. “There I realized that my knowledge of law was utterly inadequate to deal with international transactions, which I was supposed to teach back in Beijing,” he said of his decision to pursue a JD degree in the U.S. “That started my ‘honey-decades’ with Duke Law, which gave me a full scholarship and fuller education in American law.”

It wasn’t easy, and he faced occasional hostility and prejudice from classmates and some professors, but Gao described Duke Law as “heaven.”

“I was once asked by a hard-struggling law student from China why I seemed so happy and content with my studies then, living mostly in the law library. I answered, ‘If you have experienced the deprivation of knowledge for so long as I have, you would, too, view this place as the heaven of learning,’” he said. “When I was later asked a similar question as a junior associate in the sweat shop of a Wall Street law firm, I happily told the fellow associate that Vladimir Lenin taught me to learn your skills so [as] to dig the grave for capitalism.”

In fact, he said, he became “fascinated by the intricacies of the capitalistic financing machines” and, after careful study as a Wall Street lawyer and after touring most of the stock exchanges in Europe and Asia, Gao returned to China with the hope of persuading the Chinese government to establish a capital market. He succeeded in spite of considerable skepticism, and was instrumental in opening two stock exchanges in China in 1990, and a regulatory agency two years later.

After serving in leadership positions for years, most recently as head of China’s sovereign wealth fund, Gao expressed delight at returning, in his retirement, “to do what I love the most – working with young people every day, teaching and, more importantly, learning.”

Describing his life as one of many “detours,” Gao told the graduates that hardship “may pay in the long run.” He advised them to try out the roads less traveled and to embrace different views, different people, and different cultures and ideologies. “They just teach you to be more tolerant and open-minded,” he said. And he cautioned them against setting overly high material goals. “It may keep you from realizing your ideals or keeping your vision.”

In his remarks, Dean Levi praised the intelligence, initiative, and accomplishments of the graduates and thanked them for their enthusiastic contributions to and support of the Law School. He noted that the JD graduates began their legal studies just as the overall and legal economies were starting to emerge from near collapse.

“Your career now begins in a time of recovery,” he said, adding that they would likely face other periods of economic downturn in the coming decades. “Through it all, you will find that the education you have received here has prepared you to reach your full potential as a lawyer and citizen, to adapt, to learn new fields of knowledge, and to make significant contributions to maintaining the social fabric.

“You have earned the right to join our distinguished body of alumni who practice law and serve the common good all over the world.”

JD speaker Ruben Henriquez focused his remarks on the close and collegial student culture he found at Duke Law. “That will be what I’m most fortunate to take away from Duke Law, the fact that we got the chance to experience the last three years of life, in all its ups and downs, with each other,” he said. “At Duke Law our classmates are our friends, not just our colleagues. … Sharing the last three years with each other made them that much more special.”

Tolga Ozek, a lawyer from Turkey, asked his LLM classmates and the other graduates to think about how distinguished lawyers throughout history – like Jefferson, Gandhi, and Mandela – have used their knowledge of law to solve societal problems.  “At Duke Law, I have once again found a reason to affirm that I don't believe in races or ethnic separations or any other similar barriers among humans,” he said.  “I believe the only difference that makes us distinguishable is our good will and conscience to develop our systems of law and ease the life of our peoples.  I truly believe in that now more than ever, after having spent almost a year with distinguished lawyers, prosecutors, and friends from 38 different countries together, in a country where we have enjoyed freedom of speech and the rule of law at its very best.”

Speaking on behalf of graduates of the LLM in Law and Entrepreneurship program, Andrew Walton listed ways in which their year at Duke Law added value to their law degrees – and some MBAs – beyond the skills they learned in class and through practicum placements. In addition to fortitude and the integrity to succeed “with excellence, greatness, and honor,” he said they got lessons in the self-motivation and drive that characteristically propel entrepreneurs.

“In my first week at Duke University, a mentor of mine, Professor Erika Buell said, ‘Treat this program like your own entrepreneurial experience, and then treat your life in the same way.’ We have learned to invest in ourselves … to be successful.”

Retired Justice Patricia Timmons-Goodson of the North Carolina Supreme Court offered remarks on behalf of the first jurists to receive Duke Law School’s Master’s of Judicial Studies. The judges benefited from a unique and rigorous educational experience, she said, learning both from leading scholars and from one another.

“My classmates and I are grateful to Dean Levi and the team he has assembled for conceiving the [Master’s of] Judicial Studies, flawlessly executing the plan, and committing so fully to its success,” said Timmons-Goodson. “Duke Law’s leadership, vision, and commitment to the judiciary are unparalleled.  Although the only such program in the nation, the administration, faculty, and staff displayed at all times a quiet confidence in  the compelling mission to strengthen the rule of law.”

Board of Visitors member and Duke University trustee Peter Kahn ’76 welcomed each member of the Class of 2014 to the Duke Law alumni community.

At the annual Faculty Awards ceremony on May 9, faculty and administrators honored the following graduates for outstanding and sustained achievements in areas of service and specific areas of study: