Geovette Washington describes public service as “kind of like the family busi­ness.” Raised in rural Georgia by two public school teachers, Washington’s father became a county commissioner in his retirement, and eventually chaired the commission. “He emphasized the importance of public service as a cornerstone of citizenship,” she wrote last year in an essay for the website of the U.S. Department of Commerce, where she was then deputy general counsel. “He taught me the importance of service to one’s community and the duty and responsibility service requires.”

Now general counsel and senior policy adviser for the White House Office of Management and Budget (OMB) and a member, by presidential appointment, of the Council of the Administrative Conference of the United States, it’s fair to say that Washington took her father’s lessons to heart, having made public service the cornerstone of her career. “I can’t imagine what my career would have been like without it,” she says.

Having developed “the bug” for life in the nation’s capital during an undergraduate intern­ship with Sen. Sam Nunn, Washington returned there after law school to clerk for a U.S. District Court judge. At the end of her clerkship, she got a job offer from the assistant attorney general for the Office of Legal Counsel in the U.S. Department of Justice, who happened to be her former Constitutional Law professor and law school mentor, Walter Dellinger. Working in the office that directly advises the president and executive branch — and with Professors Christopher Schroeder and H. Jefferson Powell in addition to Dellinger — offered Washington an enduring lesson in the way government works, she says.

“It gave me an understanding of the process for coming to a decision on what the government’s position should be on any given matter,” she says. “The excellent career attorneys in OLC taught me what it means to be part of the government policymaking pro­cess.” Those lessons and the high-level, high-volume writing experience the job entailed, were extremely helpful during her years in private practice as a litigator and partner at Baach Robinson & Lewis. They were essen­tial when she returned to public service as deputy general counsel of the Commerce Department in 2010.

“When I came back to the Commerce Department, it was really important that I understood how the decision process worked and how important it is to be inclusive and transparent,” she says. “I learned that at the Office of Legal Counsel.”

Addressing the broad agenda of the Commerce Department, which includes such diverse agencies as the U.S. Patent and Trademark Office, the National Weather Service, and the Bureau of Industry and Security, engaged Washington with both legal issues and day-to-day management of a department of more than 250 lawyers. “It was a lot of fun and excellent preparation for my current job,” she says. “The ability to juggle a lot of different programs, problems, and issues without pulling all of your hair out is an important skill set around here.” 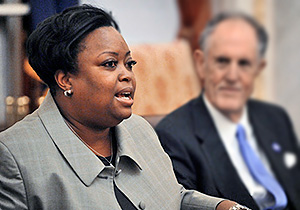 Washington spoke about her work to members of the Law School’s Duke in D. C. class during their daylong trip to Capitol Hill last October.

The range of tasks she has addressed since joining the OMB last June has offered Washington a fresh perspective on how all the parts of the executive branch fit together and how critical it is for the president’s policy goals to be woven through differ­ent departments in ways that advance his agenda, she says. Her OMB legal department of 12 — including Deputy General Counsel John Simpkins ’99 — helps interpret and enforce budget laws and ensures the right authorities are in place to allow the president to implement his desired policies.

In a January interview shortly after President Barack Obama delivered his State of the Union address in which he announced several initiatives involving executive action, Washington said her office is important in reviewing all executive orders the president issues both for form and legality and coor­dinates the inter-agency process. “So if he issues more executive orders, we will be extremely busy,” she says. The OMB general counsel also reviews and clears all constitu­tional comments from the Department of Justice, among many other matters.

Having entered private practice in 1996, Washington says she anticipated returning to the public sector as a member of the Gore administration. Instead, she found herself immersed in the recount and litigation that followed the 2000 presidential election. “It was the only case I have ever seen from start to finish in less than a month,” she recalls. “We went to trial and through a couple of appellate rounds in the course of four to six weeks. It was unheard of, the stakes were tremendously high, and it was a great expe­rience. I wish we had won, but all of those things make you stronger.”

She loved both her law firm colleagues and the clients she served in private practice, in any event, she says: “I got to work with a broad group of clients engaged with really interesting issues. I’m a people person, so the ability to help them solve their problems was really good for me.” Even as a law firm partner, though, she aimed to recruit law­yers from the public sector. “I knew they had a range of skills that they were unlikely to have developed in private practice,” she says. “Young government lawyers are given a tre­mendous amount of responsibility.”

Washington has remained very close to her undergraduate alma mater, Wesleyan College in Macon, Ga., where she encour­ages young women to consider careers in government and in law. She has remained similarly close to Duke Law, to faculty (and former colleagues) such as Dellinger, Powell, Schroeder, and Professor James Coleman, and to her classmates. On the day of her interview with Duke Law Magazine, she had spoken at the investiture of classmate Todd Hughes ’92 as a judge of the U.S. Court of Appeals for the Federal Circuit. (See Page 55.)

As she told the Law School’s Duke in D.C. interns during their fall-semester day of meetings on Capitol Hill, Washington wants all young lawyers to consider entering gov­ernment service.

“Whether you are in career jobs, which are very important, or in political jobs, you as a government lawyer will be introduced to a world of problems and processes that will completely mold and shape you and will be a good foundation moving forward,” she says.