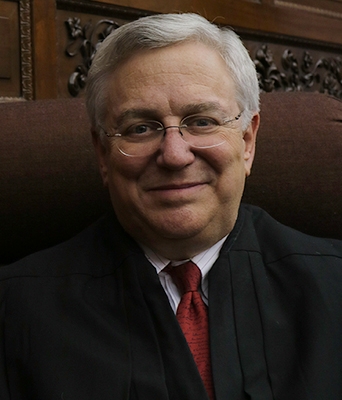 Awaiting Senate confirmation to a seat on the U.S. District Court for the District of South Carolina in 2010, Richard Gergel, then a litigator in Columbia, found himself with time on his hands. He decided to read all he could about J. Waties Waring, the first of the great Southern civil rights judges who presided in the Charleston Federal Courthouse from 1942 to 1952. Waring had somehow transformed from a product of the segregated South — his father fought for the Confederacy — to a hero of the civil rights movement who eventually declared segregation “an evil that must eradicated.” Gergel, who was assigned in August 2010 to the Charleston Courthouse where Waring presided, was intrigued. What motivated this massive change in perspective?  Although Waring’s transformation had been documented by a few historians, he remained largely an enigma, with the central question of what had led to his extraordinary journey on race and justice remaining largely unaddressed.

Gergel’s curiosity launched a seven-year project that led all the way to the White House and the records of the Library of Congress, National Archives, and numerous research libraries. As it turned out, Waring had presided over a 1946 civil rights prosecution that had been initiated as a result of the personal intervention of President Harry Truman. That case is the starting point for Gergel’s new book, Unexampled Courage: The Blinding of Sgt. Isaac Woodard and the Awakening of President Harry S. Truman and Judge J. Waties Waring (Farrar, Straus and Giroux 2019). 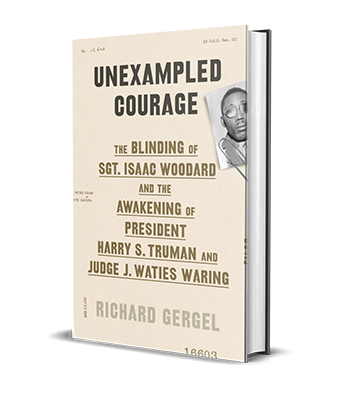 “The original focus of my research was on what changed Judge Waring,” says Gergel, whose chambers are, fittingly, located in the recently renamed J. Waties Waring Judicial Center in Charleston. Waring was a national figure in the 1940s and 1950s, and he was often asked the same question by journalists of that time. But, like many judges, Waring was reticent to speak about the cases that came before him. So during his lifetime, he gave a stock answer: “‘While on the bench, I developed a passion for justice.’” Gergel was not satisfied: “That told me nothing.”

Gergel unearthed hundreds of news articles in the course of his research — many from the African American press — as well as investigative files of the FBI and the Department of Justice, Waring’s personal papers at Howard University, and various oral histories that helped him uncover the origins of Waring’s remarkable evolution. Gergel also discovered a meeting between President Truman and civil rights leaders in September 1946, where the president first learned of the story of the blinding of Isaac Woodard. Woodard, a decorated African American sergeant, had just been discharged when he was beaten and blinded by the police chief of Batesburg, S.C. He was still wearing his U.S. Army uniform.

On Feb. 12, 1946, Sgt. Woodard boarded a Greyhound bus in Augusta, Ga., after discharge earlier that day from nearby Camp Gordon, with a planned trip to Columbia, S.C. and then on to his hometown of Winnsboro, S.C., where he was to rendezvous with his wife after several years of separation due to his military service.  Woodard asked the bus driver, during one of the frequent local stops, if he could step off to relieve himself.  Contrary to company policy, the bus driver refused, and following a heated verbal exchange, summoned the police during a stop in Batesburg. After forcing Woodard off the bus, the Batesburg police chief, Lynwood Shull, arrested and beat him repeatedly with his blackjack, ultimately thrusting the baton so hard into Woodard’s eyes that it broke.

A day after learning of the Woodard incident, President Truman wrote his attorney general, Tom Clark, and shared with him the story of the blinding of Sgt. Woodard — noting that the police officer had intentionally put out Woodard’s eyes. Within three business days, the Department of Justice initiated criminal charges against Shull for the deprivation of Woodard’s civil rights.  Gergel notes that civil rights prosecutions were rare in 1946, but President Truman was persuaded that the time for federal action had arrived.

The evidence left little doubt of guilt, but the all-white jury acquitted the police chief after 28 minutes of deliberations, and Waring was left conscience stricken. Almost poetically, the blinding of Woodard had forced him to look at segregation, Gergel says. “He [had] never questioned it, but then he observed this manifest injustice in the Woodard case.  He began doubting and questioning this segregated world he lived in.” Waring’s questions had no satisfying answers, Gergel adds. “Once you recognize this whole system of disenfranchisement and segregation, and once you start questioning it, there’s no backstop. You just sort of say, ‘This whole thing is wrong.’ That’s really where he ended up. There was no way to split the difference.”

Waring thereafter began issuing landmark civil rights decisions in the areas of voting rights, equal access to higher education, and school desegregation.  His 1951 dissent in Briggs v. Elliott, the first of five cases that made up Brown v. Board of Education, declared all government-mandated segregation a per se violation of the Fourteenth Amendment, using the memorable phrase “segregation is per se inequality.” Waring’s dissent was the first challenge by a federal judge to the separate but equal doctrine of Plessy v. Ferguson since the great dissent of Justice Harlan in Plessy 55 years earlier. Three years later Waring’s per se rule would appear once again, as the central holding in Brown v. Board of Education, the most important case in American history.

A story with personal resonance
For Gergel, Waring’s other legacy is the challenge he left behind: “In some ways, Judge Waring asks all of us for our better angels, right? That we would show ‘unexampled courage,’ which is the term he used to refer to the plaintiffs in Briggs v. Elliott, who he knew had suffered severe retaliation for their courageous participation in the landmark case. When the time and the person meet and the times demand you to do something that is against your personal interest but for a higher good — that you would step up. All of us hope we would do that. We don’t ever really know until that moment arrives.” His colleagues, he says, agree. “I speak to groups of judges all the time and they love the story for the same reason. It’s the highest calling of what we do.”

Gergel has long been drawn to such a calling. Growing up in Columbia in a progressive Jewish family, he admired Dr. Martin Luther King, Jr., who, along with Gandhi and other civil rights heroes, was often the subject of his reading. Gergel’s grandparents had emigrated from Poland in the early 20th century, and several family members they left behind perished in the Holocaust. Their fate was openly discussed in his home.

“That was very much known to me as a child,” says Gergel. “I think a lot of my parents’ feelings about the dangers of intolerance came from the experiences of their own families, because this wasn’t something that was hypothetical or a matter of history. It was a matter of family.” He imagines that the generation of judges of which Waring was a part was undoubtedly influenced by the Holocaust, too.

For Gergel, Waring’s experience in a segregated South Carolina was also particularly salient. Gergel attended high school in Columbia in the early years of genuine desegregation — the law was, for some years after Brown, largely aspirational — and was elected president of a student body that was roughly half white and half African American. “I was very engaged then in efforts to make school desegregation work,” he recalls. His efforts were formative: “It was a quite moving experience to be involved in it, and it was an important experience. I was at the frontiers of the new South.” And while mindful, always, of the privileges his skin color bestowed on him, elements of his black classmates’ experiences resonated with him.

“Being a Southern Jew, you knew something about being an outsider to some degree and had a sense of identity of being different,” Gergel says. “That made you naturally sympathetic to other people who were not mainstream. But I don’t want to suggest even for a moment that my status would have been the same as an African American student. I was white in the South — that made things a lot easier.”

Gergel realized that he would be a lifelong Southerner when his father, who had never attended college but urged his children to pursue education, took him to see several Northern schools in a driving snow storm. “He took me to Duke on a beautiful, crisp fall day and the rest is history,” Gergel says.

His father also inspired his decision to attend law school after majoring in history. “He was a very successful businessman, but he always felt that somehow he had not done what he could have done," Gergel says. "He would have loved to have been a lawyer.”

At Duke Law, Gergel made sure to take every course he could with the renowned constitutional law scholar William Van Alstyne. “He had great ideas, and his classes were always characterized by interesting discussions and stimulating debate.”

Gergel’s inclination for intellectual argument served him well in his career, first as a litigator at Gergel, Nickles and Solomon in Columbia, and now as a judge, a post he loves. “You get to do the right thing every day,” he says. “I can’t say I get it right every time, but I have the opportunity to get it right every time.”

His decisions have been followed more closely lately, as he presided over the case of Dylann Roof, the young white man who in 2015 shot and killed nine African American congregants in a Charleston church. Gergel won’t discuss the case, as Waring long ago demurred from discussing his. But the facts of the Roof case seem to echo the kind of “evil” that Woodard suffered so brutally and that Waring sought so desperately to root out in the same city nearly 70 years ago. Certainly the crime punctuates the question of why some people change despite the evil that surrounds them, while others are consumed by it.
— Amelia Ashton Thorn ’10