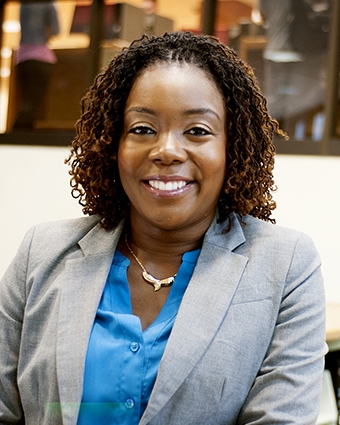 Gina-Gail S. Fletcher, an insightful and innovative scholar of complex financial instruments and market regulation, will join the Duke Law faculty on July 1 from the Indiana University Maurer School of Law. She was a visiting professor of law at Duke in the fall 2019 semester, when she taught Business Associations.

“We are delighted to welcome Gina-Gail Fletcher back to Duke Law,” said Kerry Abrams, the James B. Duke and Benjamin N. Duke Dean and professor of law. “Her keen analysis of complex regulatory topics and ability to convey them with clarity will be an asset both to our faculty and students.”

Fletcher joined the Maurer School of Law, where she teaches Corporations, Business Planning, and Financial Regulation, in 2014, after beginning her academic career at Cornell Law School, teaching Business Organizations and Corporate Governance as a visiting assistant professor. In 2016 she received the Indiana University Trustees’ Teaching Award for excellence in teaching.

Steven L. Schwarcz, the Stanley A. Star Professor of Law and Business, called Fletcher an “amazing scholar. She has a deeply intuitive understanding of the field, making her scholarship both accessible and incredibly interesting,” he said. “She’s also a wonderful person and colleague. We are all so fortunate that she’s joining us.”

Fletcher’s current research examines how various market innovations can be misused to manipulate the markets and the implications of such practices on the stability of the financial markets and on the ability of regulatory bodies to ensure market efficiency and integrity.

Her recent scholarship includes the essay, “Foreign Corruption as Market Manipulation,” U. Chi. L. Rev. Online (Jan. 7, 2020), in which Fletcher examines the possible overlap of certain foreign corrupt practices with the jurisdiction of the Commodities Futures Trading Commission (CFTC), the exclusive regulator of the derivatives and commodities market and which has as one of its primary concerns the detection and deterrence of market manipulation. The essay analyzes the possible effects of the CFTC venturing into prosecuting foreign corruption, which could include additional new compliance requirements for derivatives and commodities market participants.

And in “Macroeconomic Consequences of Market Manipulation,” 83 Law and Contemporary Problems 123-140 (2020), Fletcher discusses the evolution of manipulative techniques and strategies since the 2008 financial crisis and analyzes the ways manipulation in which contributes to instability of and greater risk in financial markets, such as decreasing the market’s resiliency to shocks, increasing market volatility, and causing the mispricing of assets.

Said Lawrence Baxter, the David T. Zhang Professor of the Practice of Law and faculty director of the Global Financial Markets Center: “The financial law offerings at Duke Law will be greatly enriched by the arrival of Professor Fletcher. I am particularly impressed at her ability to convey exceptionally complex concepts in the field of derivatives with a clarity that students are going to love. Her research in the area is exciting.”

A scholar and teacher shaped by tumultuous times

Fletcher’s research interests were directly shaped by her experiences entering law at the height of the financial crisis. Following her graduation from Cornell Law School in 2009, Fletcher became an associate attorney at Gibson, Dunn & Crutcher in Washington, D.C., where she specialized in securities regulation, mergers and acquisitions, banking, and corporate governance. There, she had the opportunity to help draft parts of the 2010 Dodd-Frank Wall Street Reform and Consumer Protection Act which, among other things, established the Consumer Financial Protection Bureau and the Securities and Exchange Commission Office of Credit Ratings, expanded whistleblower protections, created agencies to monitor the financial stability of major financial firms, and enacted new rules to regulate derivatives and limit risky practices by banks, such as speculative trading and investing in hedge funds and private equity firms.

“I can directly say that my interest in this came from being able to work so closely on things like the Dodd-Frank Act during that very tumultuous time,” said Fletcher. “It’s how I became familiar with derivatives, how they were being regulated, and what role they played in the crisis. It also gave me that exposure to the Commodity Futures Trading Commission (CFTC), which has regulation over a significant segment of the market and is really important, though it’s often overshadowed by the SEC.”

The 2008 financial crisis and the regulatory structures subsequently put in place to avoid another are the focus of a seminar Fletcher taught this semester at Indiana Law and which she hopes to teach at Duke Law. That event, and other booms and busts through history, provide reference points for class discussion on current economic turbulence which, while rooted in a worldwide pandemic, raises similar themes and issues and is pressuring many of the same market segments, she said.

“We incorporated current documents that talk about the coronavirus crisis and the impact it’s been having on different segments of the market, what this new bailout looks like for this crisis versus the bailout we had for the last crisis, and I think for some of the students it has been really nice to be able to talk about it in such concrete terms, even if it’s distressing for them in other ways.”

Known for her warm classroom demeanor and inclusive teaching style, Fletcher uses what she calls a ‘soft Socratic method’ to engage with students in classes like Business Associations. That class, she said, tends to attract two types of students: those who are already aiming for a career in corporate law and those who intend to pursue another specialty but feel they need some exposure to business. Fletcher said she understands what it is like to be the latter.

A first-generation college and professional school graduate, Fletcher was born in Jamaica and moved to the United States to attend Mount Holyoke College, where she majored in political science and Spanish language and literature. She entered law school intending to be a litigator but, after an unhappy summer doing litigation work, was steered to business classes by a mentor.

“I had the same reaction as a lot of my students: I have no business training and no business background and there’s no reason why this should be interesting to me,” Fletcher recalled.

Against her expectations, she found it fascinating, and after a summer’s exposure to transactions in a corporate department Fletcher decided she “completely loved” the field. She credits her law professors who laid out concepts in a straightforward manner and strives to do the same, frequently stopping to ask students, “Are we all on the same page?”

“My goal is to never confuse them or leave them with more questions than they came into the classroom with, but to push them a bit,” Fletcher said. “I want them to not just learn the black letter of the law, but to understand its application and its implications for various constituencies and other persons.

“I speak to everyone’s level as best I can and I don’t presume certain knowledge. When you indicate to students that you are willing to meet them where they are and build from there, they tend to find the material a lot more engaging. So I strive to level the playing field.”

Fletcher said she greatly enjoyed teaching at Duke last fall. “My students in Business Associations were some of the most amazing students I’ve ever worked with.” The feeling was mutual; Curtis Bradley, the William Van Alstyne Professor of Law, who chaired the selection committee, said her students made it clear they would love for her to join the faculty permanently.

One of those was Gerardo Parraga ’21, who said Fletcher made Business Associations his favorite class.

“I have seldom enjoyed a class like I did Professor Fletcher’s,” Parraga said. “She is funny, holds a strong command over the classroom and, most importantly, is a master of the material. I am positive that anyone who takes her class next year will benefit from it.”

A strong addition to an already formidable group

Fletcher said she is thrilled to join other members of Duke Law’s highly esteemed corporate law faculty, including Professor Elisabeth de Fontenay and James Cox, the Brainerd Currie Professor of Law, as well as Baxter and Schwarcz.

“Coming to Duke is an amazing opportunity to be on a faculty with such well-known legal and scholarly minds, and to be able to contribute to that community is something I’m truly excited about,” Fletcher said.

“It’s very important to look at what other scholars have done before me and build on that in meaningful and innovative ways. And I think that opportunity for collaboration is there for me

She has already built relationships with faculty scholars through her long participation in Duke’s Culp Colloquium and Emerging Scholars Program and calls Guy-Uriel Charles, the Edward and Ellen Schwarzman Professor of Law and co-founder of the Culp Colloquium, “one of my biggest mentors and cheerleaders as I’ve been growing as an academic. He has been very instrumental in my development as a legal scholar even though we are not in overlapping fields.”

Fletcher also will reunite with her Indiana Law colleague H. Timothy Lovelace, Jr., a noted legal historian of the civil rights movement, who is joining the Duke Law faculty in June.

“I’m looking forward to building new relationships at Duke and it’s also great to be able to maintain one that has been very near and dear to me in Indiana,” Fletcher said.