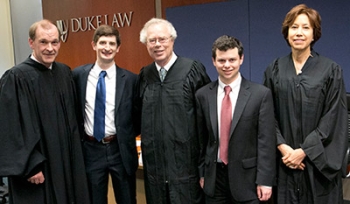 Judge Paul V. Niemeyer of the U.S. Court of Appeals for the Fourth Circuit served as chief justice. Also serving on the panel were his Fourth Circuit colleague Judge Allyson K. Duncan ’75 and Chief Judge James C. Dever III '87 of the U.S. District Court for the Eastern District of North Carolina, who both teach at the Law School and are members of the Board of Visitors. The judges complimented both Glassberg and Hawkins on the quality of their argumentation and their poise despite difficult questions.

“The decision was a very close one,” Niemeyer said in announcing the judges’ opinion. “You guys are well on your way. I hope we see you come before our court and argue because I know you’ll do very well.”

Added Duncan: “I think you both did a great job with a very difficult question and a case that I argued with two of my law clerks about for an hour yesterday. We just went around and around, so I sympathize.”

The Hardt Cup problem was based on Horne v. Department of Agriculture, a case currently pending before the Supreme Court. The petitioner, a raisin farmer, is required to reserve a certain amount of its raisins for sale by the government in non-competitive, secondary markets. The purpose is to stabilize the raisin market, and proceeds from the sales, after paying operating costs of the program, are distributed among raisin farmers.

Glassberg and Hawkins argued two matters: whether the transfer of title of the reserve raisins to the government amounts to a per se taking of the property, and if so, whether the equitable interest retained, through the distribution of the proceeds back to farmers, suffices as “just compensation.”

“This case is about ensuring that family-owned farms receive their Constitutionally protected right not to be deprived of property without just compensation,” Glassberg said. “The only property right that the Hornes maintain is an equitable interest in these raisins, which in recent years has turned out to be almost nothing.”

The case is on appeal from the Court of Appeals for the Ninth Circuit, which decided in favor of the Department of Agriculture.

The Hardt Cup Competition was launched by students in the Class of 1964, in memory of their classmate, A. Lee Hardt, who died after completing his first year at Duke Law. The annual four-round competition for 1Ls is organized by the Moot Court Board and held in the weeks following spring break, with participation in the first round a mandatory component of the 1L Legal Analysis, Research and Writing curriculum. Participation in subsequent rounds, through which students can earn an invitation to join the Moot Court Board, is voluntary. This year, 220 students participated in the first round, 115 elected to continue to the second round, and 22 accepted invitations to join the Moot Court Board.

In each of the three preliminary rounds, students argued twice in front of members of the board. Panels of faculty judges scored the quarterfinal round and the semifinal round was judged by local practitioners. Moot Court Board members Chantalle Carles, Jyoti Jindal, and Daniel Stockton, all 2Ls, served as 2014-2015 Hardt Cup coordinators.

Dever joined the other two justices in commending the finalists, who he said “both just did an outstanding job.”

“I know how long the competition has been going on because I know a lot of the members of the Moot Court Board and I know how hard they’ve been working on this competition,” he said. “And I know how hard just progressing through all the rounds to get to this point [is] with exams coming up soon and everything else.”